SEOUL/WASHINGTON, June 20 (Yonhap) -- South Korean President Moon Jae-in condemned North Korea Tuesday for the death of an American student who died after his release from detention in the communist North, calling Pyongyang an "irrational regime."

"We can speculate that there were many unjust and cruel treatments to Mr. (Otto) Warmbier. And I strongly condemn such cruel actions by North Korea," Moon said in an interview with CBS, according to a script of the interview posted by the American news outlet.

"We cannot know for sure that North Korea killed Mr. Warmbier. But I believe it is quite clear that they have a heavy responsibility in the process that led to Mr. Warmbier's death," he added.

Warmbier, a 22-year-old University of Virginia student, returned home in a coma last week after 17 months of detention in the North.

He died Monday (U.S. time), six days after his release.

Moon expressed his condolences to the bereaved family of Warmbier and said his death should have made all realize how important it was to rid the communist North of its nuclear weapons.

"I believe we must now have the perception that North Korea is an irrational regime. Working with such a country, we must achieve the goal of the complete dismantlement of North Korea's nuclear program," he said.

The new South Korean leader still noted a need to resume dialogue with the North, insisting the world has been "unable to resolve the North Korean nuclear issue through only sanctions and pressure."

Moon said resuming dialogue with the North required certain preconditions without elaborating on what those conditions were.

Moon's interview came ahead of his scheduled visit to the United States next week for summit meetings with his U.S. counterpart Donald Trump.

The new South Korean president said his position on how to deal with provocative North Korea was not at odds with that of the U.S. or its president.

"It seems to me that President Trump has criticized the failed former policies of his predecessor administrations. And on that point, I have the same view as President Trump," he said.

Moon and Trump are set for their first talks in Washington next Thursday and Friday. Moon came into office on May 10. 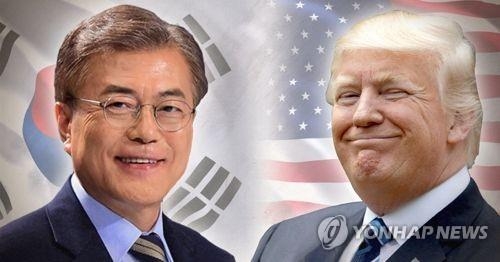 Moon also said he believes the North's leader wants a security guarantee for the regime. Even though the North's leader brandishes nuclear and missile programs, Moon said it's possible that "deep inside, he's actually yearning or wanting dialogue."

"But in the end, the only way to find out is to have a dialogue with North Korea," he said.

Asked if the North's leader would like a burger, Moon said, "Most likely, maybe."

In response to a question of if he would oppose a preemptive U.S. strike on the North aimed at foiling an intercontinental ballistic missile test, Moon said a preemptive strike is something that should be discussed at a later stage.

"When it comes to North Korea's nuclear missile threat, it is more dire for the Republic of Korea. For the United States, the North Korean threat is a future threat on the horizon, but for us, this is a matter of life and death," Moon said.

"When it comes to a preemptive strike, I believe this is something we may, we can discuss at a later stage when the threat has become even more urgent," he said.

Moon said he hopes to work closely with Trump for peace on the Korean Peninsula.

"The two of us will both be in office and working together for the next five years and the two of us also share the common goals of resolving the North Korean nuclear issue, establishing a peace regime on the Korean Peninsula and building peace and security in Northeast Asia," Moon said.

Moon also said that he "highly commends" Trump for putting North Korea on top of his priority list.

"I also believe that thanks to President Trump's approach and attitude, there is a possibility of resolving this issue," he said.