WASHINGTON, June 20 (Yonhap) -- U.S. President Donald Trump said Tuesday that it was "a total disgrace" that American college student Otto Warmbier died just days after he was released from North Korea in a coma after a long detention.

"What happened to Otto is a disgrace. And I spoke with his family. His family is incredible ... but he should have been brought home a long time ago," he said. 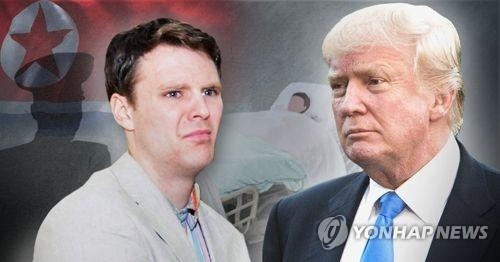 After Warmbier's death, Trump released an official statement mourning his death and condemning the "brutality" of the North Korea regime.

Secretary of State Rex Tillerson also said in a statement that the U.S. holds North Korea accountable for Warmbier's "unjust imprisonment, and demand the release of three other Americans who have been illegally detained."

Three more Americans are still detained in the North, all of them Korean-Americans.

Two, Kim Hak-song and Kim Sang-dok, were detained earlier this year, while the third, Kim Dong-chul, was arrested in October 2015 and sentenced to 10 years of hard labor on charges of espionage and subversion.