WASHINGTON, June 20 (Yonhap) -- The chairman of the U.S. House Foreign Affairs Committee has called for a ban on tourist travel to North Korea after American student Otto Warmbier died just days after his release from the North in a coma.

"Travel propaganda lures far too many people to North Korea. This is a regime that regularly kidnaps foreign citizens and keeps 120,000 North Koreans in barbaric gulags. The United States should ban tourist travel to North Korea," Rep. Ed Royce (R-CA) said in a statement released Monday.

"My thoughts and prayers are with the Warmbier family. Over these past 18 months they've endured incredible pain and suffering, all because their son allegedly took a poster off a hotel wall in Pyongyang. I hope, someday soon, they can look beyond this senseless killing and find peace," Royce said. 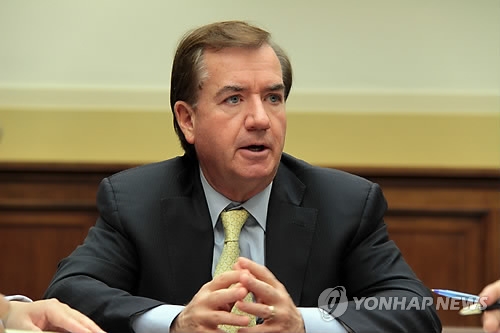 Last month, a bipartisan group of congressmen, led by Rep. Adam Schiff (D-CA), introduced the North Korea Travel Control Act (H.R.2732) that would prohibit travel to North Korea by Americans without permission from the government.

"Should there be a travel ban for U.S. citizens going there relative to this. That's something we're looking at," Corker said on MSNBC's "Morning Joe."

"Americans end up being there. We got three there today that have charges, trumped-up charges against them, and we have got to figure out whether it's best to allow people to do that and then end up in a situation where we're doing everything we can as a nation to get them out," he said.

"Look, I assume there's going to be an autopsy and we'll know more about what actually led to what caused him to pass away. It's obviously incredibly sad," he said.

Royce calls for ban on tourist travel to N. Korea after Warmbier's death

Royce calls for ban on tourist travel to N. Korea after Warmbier's death