Yonhap and the Ministry of Unification will co-host the symposium June 29 at Lotte Hotel in central Seoul.

The three-session forum, the third of its kind, will serve as the venue for discussions on security situations on the Korean Peninsula and visions for a peaceful unification, it said.

At the first session, experts will discuss the new government's policies on North Korea and foreign affairs, followed by talks on how to bring peace to the Korean Peninsula at the next session.

Panelists will discuss South Korea's role in the current security landscape at the third sitting.

In 2015, Yonhap held the forum on unification for the first time to mark the 70th anniversary of Korea's liberation from the 1910-45 Japanese colonial rule.

It said it plans to hold the forum every year to provide insight into preparations for unification. 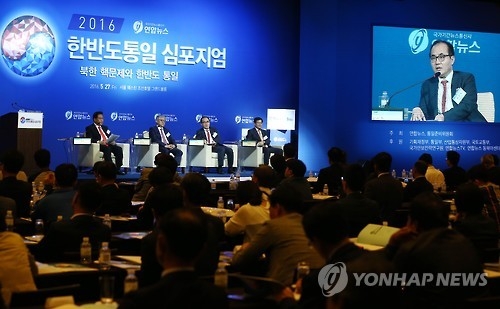