"During my campaign, I never mentioned the downsizing or adjusting of the Korea-U.S. combined military exercises," the president said.

Moon's remarks came after his special security adviser Moon Chung-in insisted Seoul and Washington may consider scaling back their joint military exercises in exchange for North Korea freezing its nuclear and missile development programs while speaking to reporters in Washington.

The South Korean president said the Yonsei University professor was only voicing his personal views. 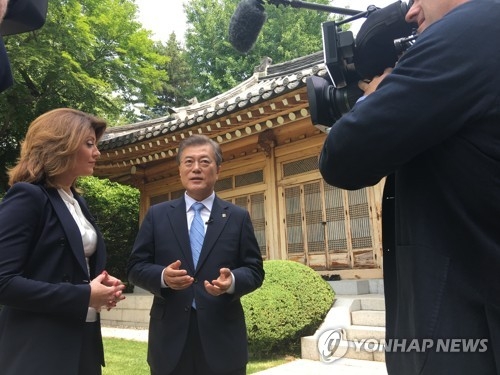 "And what he mentioned in Washington was his personal view," he added.

The U.S. currently keeps some 28,000 troops stationed in South Korea, a legacy of its participation in the 1950-53 Korean War for the defense of its South Korean ally.

Moon, however, noted scaling back the joint military drills may be an option, though he noted it still required further discussion and agreement, apparently from the United States.

"I believe when it comes to detailed strategy and tactics on how we will achieve this, this will have to be discussed and agreed upon," he said.

In a part of the interview with CBS aired earlier, the South Korean president stressed a need to add dialogue to options for dealing with North Korea, noting currently there only existed sanctions and pressure.

Saying the former U.S. administration's "strategic patience" with the communist North to change on its own has failed, the new South Korean president said he may sit down with North Korea for dialogue should the impoverished state show a willingness to change, possibly by freezing its nuclear and missile programs.

"I believe in the end you cannot deny the fact that strategic patience has failed," he said.

"So I believe what is urgent now is to prevent North Korea from making further nuclear and missile provocations by making North Korea freeze its programs," Moon said. "If we achieve that freeze in North Korea's programs, we will be able to sit down and talk with the North Koreans to achieve complete dismantlement, and I hope that President (Donald) Trump agrees with my view."

Moon and Trump are set to hold bilateral talks in Washington next Thursday and Friday.