Jeonbuk said they've received an offer from Kashiwa and both sides are currently closing the deal on the 27-year-old's transfer.

Kim is familiar with the Japanese football league. He made his pro debut with Cerezo Osaka in 2010 before moving to Britain to play with Cardiff City and Wigan Athletic. After three-year stints in English pro football leagues, he returned to Japan after signing with Matsumoto Yamaga.

Kim is a member of the bronze medal-winning South Korean team at the 2012 London Olympics. For the senior side, he has four goals in 35 international appearances.

Kashiwa are currently the leaders in the first division J1 League with 10 wins, one draw and four losses. The 2011 Japanese league champions also have South Korean left back Yun Suk-young on their squad. The former Queens Park Rangers man previously played with Kim on the South Korean Olympic football team and the senior squad. 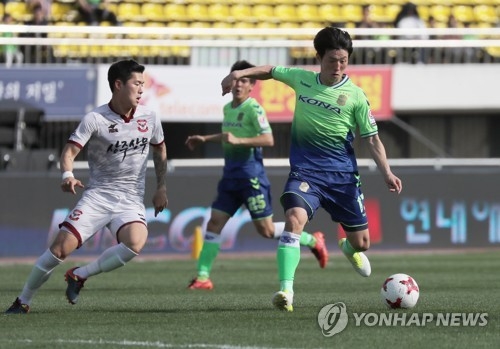