Episode 10 of "Fight For My way" aired on Tuesday recorded 11.2 percent viewership nationwide, according to Nielsen Korea.

Starring Park Seo-joon and Kim Ji-won, the show centers around a group of four young adults, who say they have "third-rate lives" due to their mundane and mediocre lives, but later push forward to realize their unfulfilled childhood dreams. 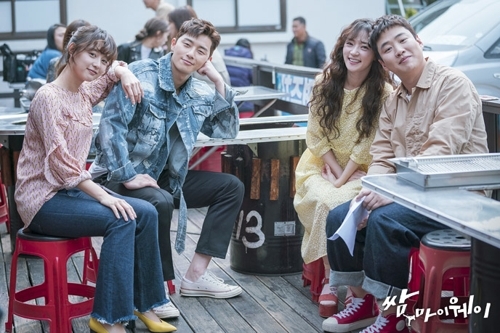 SBS TV's "My Sassy Girl," a romantic comedy that is a remake of the Jun Ji-hyun movie from 2001 but in a Joseon-era setting, came in second. Episode 16 and 15 recorded 10.3 percent and 8.3 percent, respectively.

The show aired in a new format in which a one-hour conventional TV episode is split into two half-hour airings with ads inserted into the middle.

MBC TV's "Lookout," an action crime drama about a group of vigilante hackers pursuing justice outside of judicial boundaries, finished third. Ratings for episode 19 and 20 came to 8.5 percent and 8.6 percent, respectively.