The drone took off from Kumgang County in the North's eastern province on May 2 and crossed the Military Demarcation Line (MDL), the South's defense ministry said, citing a "scientific probe" that was conducted with the Agency for Defense Development.

The drone flew for around 5 1/2 hours, taking more than 550 photos, including those of the site for the U.S. missile interceptor system, called THAAD, in Seongju, some 270 kilometers southeast of Seoul, added the ministry. 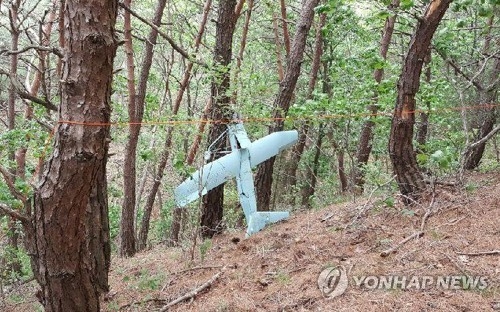 It apparently crashed on the mountain in Inje, Gangwon Province, close to the MDL on its way back to the North. It was discovered by a local resident June 9.

"North Korea's act this time is a clear military provocation violating the (1953) Armistice Agreement and the (1992) bilateral nonaggression pact," the ministry said.