The drone took off from Kumgang County in the North's eastern province on May 2 and crossed the Military Demarcation Line (MDL), the South's defense ministry said, citing a "scientific probe" that was conducted with the state-run Agency for Defense Development (ADD).

It examined the data of the drone's onboard computer, camera and GPS device.

"(We) have confirmed that it's North Korea's small unmanned aerial vehicle (UAV) on the basis of clear scientific evidence from the analysis of its flight path and others," the ministry's spokesman Moon Sang-gyun said.

The UAV with a wingspan of 2.86 meters flew for around 5 1/2 hours, taking 551 photos, including those of the site for the U.S. missile interceptor system, called THAAD, in Seongju, some 300 kilometers southeast of Seoul.

It was programmed to fly back to the North, which the South calls another "smoking gun" for North Korea's culpability. 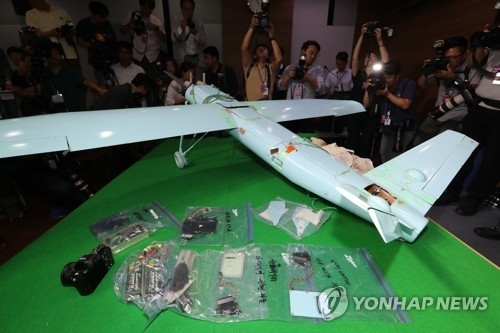 It apparently crashed on the mountain in Inje, Gangwon Province, close to the MDL on its way back to the North. It was discovered by a local resident on June 9.

South Korea has requested the United Nations Command to look formally into the case in accordance with the Armistice Agreement that effectively ended the Korean War.

"(We) will take appropriate measures in accordance with the results of its investigation," he said. 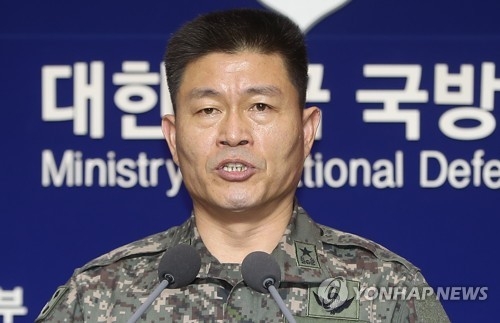 Should the North continue such provocative acts, he warned, it will face tough retributions from the South's troops and it will be fully accountable for all consequences.

In 2014, three drones were found in three different areas just south of the heavily armed border between the two Koreas. Following weeks of an investigation, the South put the blame on the North.

Experts said the North has improved its drone capability.

The recently found one traveled a total of 450 kilometers before it crashed. It seems to have run out of fuel, presumably due to an engine malfunction, according to Kim Jong-sung, a senior ADD researcher.

It was carrying a Sony-made camera, weighing only 400 grams, far lighter than the 900g camera of a 2014 drone.

The engine displacement had been expanded to 50cc from 35cc, with the fuel tank capacity more than doubled at 7.47 liters.

North Korea watchers suppose that the secretive communist nation has hundreds of drones either for surveillance or weaponized attacks.

The North, which has no satellite, appears to be trying to update its own map for military purposes and get a direct image of potential targets in the South for guided weapons, they pointed out.