SEOUL, June 21 (Yonhap) -- North Korean leader Kim Jong-un appeared in public 51 times this year, mainly in the fields of defense and the economy, an analysis of news reports showed Wednesday. 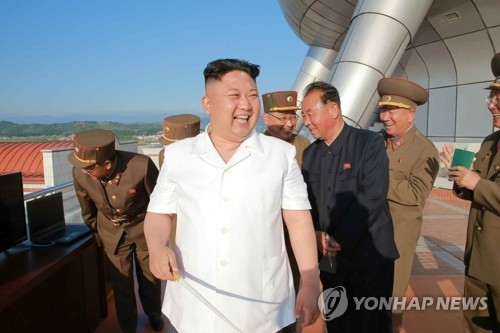 Of the 51 public appearances, defense-related activities accounted for the largest portion at 21, followed by inspections of the economy and public livelihoods at 15, attendances at political events at 11, and concert attendances and other activities at four.

Kim made 10 public appearances, about 20 percent of the total, to oversee his country's missile development. He appeared to focus more on defense compared with the same period last year when he conducted 26 defense-related public activities and 24 economic activities.

The total figure, 51, represents a 21.5 percent decrease from 65 in the same period last year.

According to data from the Ministry of Unification, Kim's public activities have decreased every year since 2013, when the number stood at 212.

Of those who accompanied Kim on his trips, military chief Hwang Pyong-so was seen most frequently (21 times). Hwang is the director of the general political bureau of the North's Korean People's Army.