SEOUL, June 21 (Yonhap) -- South Korea or its head of state Moon Jae-in does not need permission from the U.S. president or anyone else to engage North Korea in dialogue, Seoul's presidential office Cheong Wa Dae said Wednesday.

"Resumption of dialogue with North Korea may need to be pursued in close cooperation and consultation with the United States, but South Korea does not need to be allowed by the U.S. to do so," Kwun Hyuk-ki, a Cheong Wa Dae spokesman, told Yonhap News Agency.

The remarks came in reaction to a question by a U.S. journalist in a recent interview with South Korean President Moon Jae-in, in which the interviewer from U.S. broadcaster CBS stated it was not clear whether U.S. President Donald Trump would "agree to allow" his South Korean counterpart to negotiate with the North Koreans. 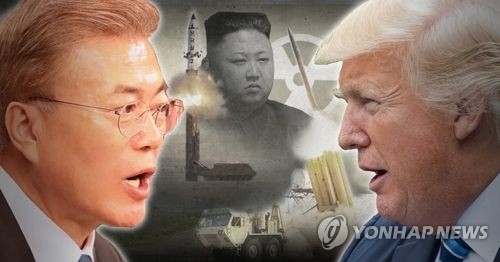 Another Cheong Wa Dae official insisted the word "allow" should be taken to have meant "let it happen," claiming most Americans who watched the CBS report must have.

However, the U.S. interviewer also said, "President Moon believes he is going to get the green light from President Trump to have these bilateral talks with North Korea, to begin this inter-Korean dialogue."

Many South Koreans reacted with anger in online postings.

"The president must have been very offended when given the question. He still managed very well," one Internet user said on a local internet bulletin board.

Without interpreting what the word "allow" may have intended to mean, the Cheong Wa Dae spokesman flatly dismissed the notion that the South Korean president would ask for U.S. permission to engage with North Korea.

Moon and Trump are scheduled to meet in Washington for bilateral talks next Thursday and Friday.