SEOUL, June 21 (Yonhap) -- The vice chief of a presidential job creation panel renewed his appeal for the parliamentary passage of an extra budget bill Wednesday amid a continued political standoff over its legality.

During a meeting with senior officials of the ruling Democratic Party, Lee Yong-sup of the Presidential Committee on Job Creation reiterated that if the 11.2 trillion won (US$9.9 billion) supplementary budget is not drawn up, the country could face an "unemployment crisis."

His appeal came as three opposition parties opposed the bill, saying it conflicts with the National Finance Act that stipulates an extra budget can only be set aside during a massive natural disaster, economic recession or mass unemployment.

"The extra budget is the beginning of (President Moon Jae-in's) policy to create jobs and if this gets bogged down, it would be difficult for us to meet citizens' wishes for the creation of quality jobs," he said. 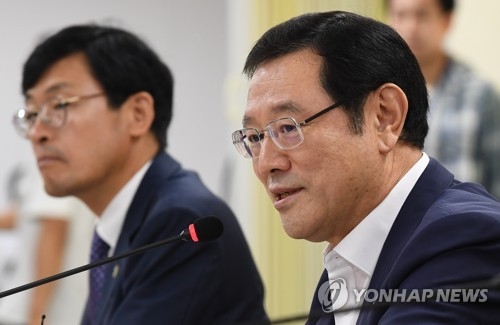 According to government data, the country's jobless rate came to 4.2 percent in April, the highest for the month in 17 years. Last month, the rate was tallied at 3.6 percent, down 0.1 percentage point from the same month last year.

At the National Assembly, the political standoff over the budget bill showed no signs of abating.

Opposition parties grew more combative as Moon has pressed ahead with the appointments of Kim Sang-jo as Fair Trade Commission chairman and Kang Kyung-wha as foreign minister despite their alleged ethical lapses.

A parliamentary deliberation committee has yet to bring the budget bill up for a review, as the main opposition Liberty Korea Party (LKP), People's Party and Bareun Party remain opposed to the idea of using the budget for creating jobs in the public sector. The parties argue that it would impose a financial burden on the state.

The passage of the bill requires consent from a majority of the lawmakers present for a vote that can be set up by half of all 299 lawmakers. The ruling Democratic Party (DP) holds only 120 seats, far short of a majority, while the three opposition parties hold 167 seats in total.

The DP hopes to put the bill to a vote at a parliamentary plenary session slated for next Tuesday. But observers said it would be difficult for the legislature to complete its deliberations on the bill by then.

The ruling party has also been considering pushing for another extraordinary parliamentary session next month.

Meanwhile, activists from a civic group called "Political Mothers" staged a rally in front of the parliamentary building to call for the passage of the budget bill and another aimed at preventing overtime work. The group voiced concerns over the current political deadlock. 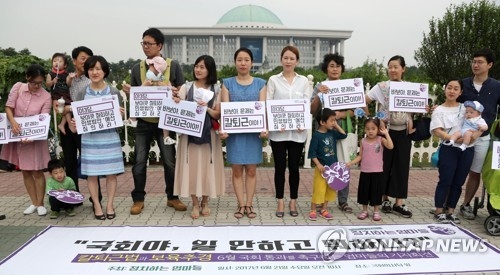