SEOUL, June 21 (Yonhap) -- The U.S. Senate has scheduled a hearing that is expected to focus on the death of Otto Warmbier, an American college student who was detained in North Korea for more than a year, its website showed Wednesday.

Warmbier, 22, died Monday, days after returning home in a coma following 17 months of captivity in the North for stealing a political propaganda poster from a hotel in Pyongyang.

The Senate Committee on Foreign Relations will hold a closed session at 11 a.m. Thursday (Washington time) to be briefed by Joseph Yun, U.S. Special Representative for North Korea Policy, on "recent developments" related to the communist regime, according to its website.

Yun visited Pyongyang earlier this month to bring Warmbier home after he was reportedly informed of the University of Virginia student's condition during talks with North Korean officials in New York.

Three other Americans remain detained in the North. 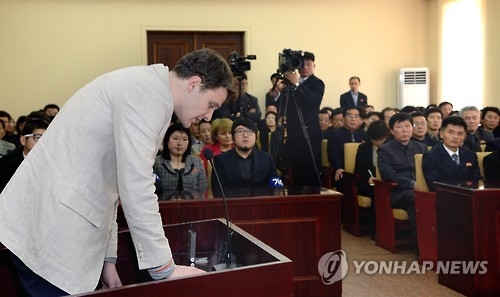 Senate to hold hearing expected to focus on Warmbier's death

Senate to hold hearing expected to focus on Warmbier's death