The mobile role-playing game -- which has gained huge popularity after its release in 11 Asian countries earlier this month -- will be available to Japanese users during the third quarter of this year, the company said. The exact date has yet to be decided.

The company said it has received a total of 540,000 pre-orders in Japan since April.

"It is very unusual to receive more than 500,000 pre-orders in just two months without going through a local platform," said Cho Shin-hwa, a Netmarble Games official, partially attributing the success to a customized marketing strategy for each market.

Netmarble Games, established in 2000, has produced some of the most successful mobile and online games, including "MARVEL Future Fight," "Seven Knights" and "Everybody's Marble." The company successfully debuted on Seoul's bourse in May.

Netmarble, however, faces some competition both at home and abroad as NCsoft Corp., a South Korean online gamemaker, released the mobile version of its mega-hit game "Lineage," "Lineage M," earlier in the day and currently ranks as the No. 1 mobile application in terms of sales.

"Lineage M" became the most popular app both in the Google Play Store and Apple's App Store in South Korea, within seven hours of its launch, the company said. 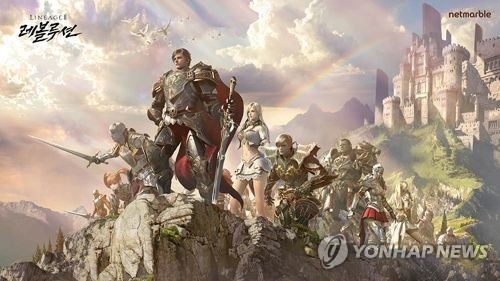 Netmarble to release hit mobile game in Japan in Q3

Netmarble to release hit mobile game in Japan in Q3