Consul General Lee Key-cheol visited the Best Western Hotel in Placentia, California, where the two women -- a mother and daughter -- were robbed and the mother was beaten and left unconscious on Friday, before meeting with Placentia Police Chief Darin Lenyi to convey the South Korean government's concern over the incident.

During the talks with Lee, Lenyi was quoted as saying the robbery appears to be premeditated and Placentia police are investigating the case in close contact with other law enforcement authorities in nearby cities. 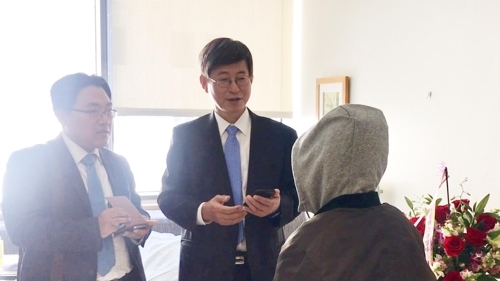 Lee also visited a hospital where the 55-year-old mother remains with serious injuries and comforted her over the violent incident.

The mother who was visiting from South Korea and the 25-year-old woman were robbed in the parking lot of the hotel around 6:00 p.m. on Friday. The daughter told police that two men got out of a blue sedan and one of them attempted to grab the mother's purse.

As the mother resisted, the other male suspect pointed a gun at her. Even after the suspects took her purse, they pushed the mother to the ground and began punching and kicking her until she was unconscious. The suspects returned to the waiting car and fled the scene.