SEOUL, June 21 (Yonhap) -- Taeyang, a member of the popular K-pop boy band BIGBANG, was appointed as an honorary ambassador for the 2018 PyeongChang Winter Olympics on Wednesday.

PyeongChang 2018 will take place from Feb. 9 to 25 next year in PyeongChang, some 180 kilometers east of Seoul, and its neighboring sub-host cities in Gangwon Province.

Taeyang said he's going to compose a promotional song on the Olympics.

"Since I am a recording artist, I'll try to promote the PyeongChang Winter Olympics through music," he said at a ceremony in Seoul introducing him as the honorary ambassador. "I'll write a song about the PyeongChang Olympics before November and hopefully a lot of people will be able to enjoy it."

Among winter sports, Taeyang said he's a fan of figure skating and curling, and added he'd like to see teen figure skater, Cha Jun-hwan, do well in PyeongChang next year. 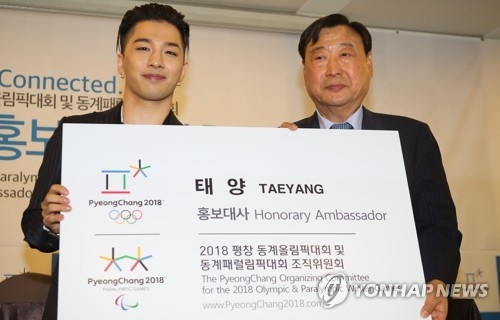 BIGBANG has been an iconic K-pop act since its debut in 2006. Taeyang, like other members, has carved out a successful solo career, and has also performed in the duo GD X Taeyang with fellow BIGBANG member G-Dragon.