SEOUL, June 22 (Yonhap) -- South Korea will have plenty of stumbling blocks ahead in its bid to assemble a unified, all-Korean women's hockey team at next year's PyeongChang Winter Olympics.

New Sports Minister Do Jong-hwan told PyeongChang's organizing committee on Tuesday that he'll have discussions with the International Olympic Committee (IOC) on putting together a joint Korean squad for the competition.

Promoting peace has long been one of the goals of PyeongChang 2018, the first Winter Games to take place in South Korea. With liberal-minded President Moon Jae-in in office, there seems to be no better time, at least in the eyes of bureaucrats, to pursue sports projects that they feel will help ease lingering tensions on the divided peninsula. 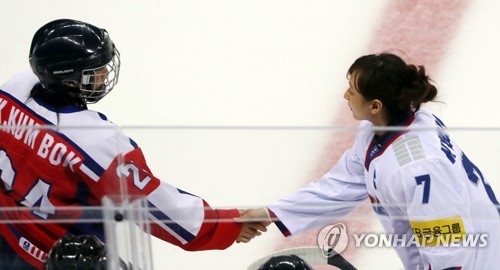 The Koreas have marched in together at Summer Olympics before and have fielded joint teams in table tennis and men's football. But the two have never had a single squad in any sport at the Olympics, summer or winter.

And building a joint women's hockey team with the Olympics just under eight months away is a touchy issue on many levels, more so than some of the people pushing for the idea may realize.

South Korea, ranked 22nd in the world and rising, has earned an Olympic spot as the host nation. North Korea, ranked 25th but on the downslope for the past decade, didn't even compete in the qualifying tournament.

The talent gap between the two countries became apparent when they clashed in a historic showdown at the International Ice Hockey Federation (IIHF) Women's World Championship Division II Group A in April in Gangneung, some 230 kilometers east of Seoul. South Korea won 3-0, a score that could well have been much more lopsided, and went on to win the tournament. North Korea finished fourth among the six nations. 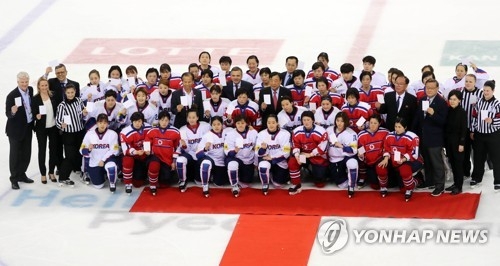 Building teamwork is another issue. The South Korean players have been competing and practicing together for years, and the forward lines and defensive pairings have mostly stayed intact. Disrupting their chemistry for the sake of pushing a "peace" agenda at the Olympics won't sit well with the athletes.

And because South Korea, despite its recent surge, isn't nearly good enough to qualify for the Winter Olympics on merit, this will most likely be the first and last Winter Games for the players. Asking a few players to abandon their Olympic dreams and make room for some North Koreans who didn't even try to qualify for PyeongChang would be simply too much.

"We've been preparing for this for two, three years, and I find the idea of a joint team difficult to accept this close to the Olympics," said South Korean forward Park Jong-ah, the team's top scoring threat. "I hope (the officials) will see things from the athletes' perspective."

Logistics will also cause some headaches. The South Korean women's team has scheduled an overseas camp in Europe and will also hold some friendly games at home later in the summer. How the North Korean players will fit into that picture, if it comes to that, is another critical issue.

Do's comments came just days before a visit to South Korea by IOC President Thomas Bach, who will attend the closing ceremony of the World Taekwondo Federation (WTF) World Taekwondo Championships in Muju, 240 kilometers south of Seoul, on June 30. Also in South Korea for the WTF competition will be Chang Ung, the lone North Korean member of the IOC. The North Korea-led International Taekwondo Federation will have its demonstration team stage a joint performance with a WTF team in the opening ceremony.

A joint Korean team in any sport will surely spark interest in PyeongChang 2018, which has had trouble creating much of a buzz, but even an official from its organizing committee admitted the issue is "a complicated" one. 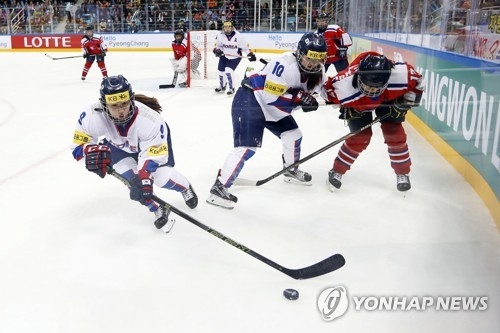 "At this point, everyone is presenting ideas," an official said on the condition of anonymity. "The new president is focused on engagement, and everybody is putting forth ideas. At one point, there's going to be a discussion on which of those ideas we're going to pursue. (A joint women's hockey team) sounds easy but it's very complicated."

When reached by Yonhap News Agency, an IOC official called the possibility of a joint Korean hockey team "a hypothetical situation" and thus the IOC has no comment at this juncture.

Do himself has qualified his remarks by saying nothing is set in stone, saying the opinions of North Korea and other competing nations will also matter.