SEOUL, June 21 (Yonhap) -- The chief of the United States Forces Korea (USFK) reaffirmed Wednesday that the solid alliance between South Korea and the United States will remain unwavering well into the future against belligerent North Korea.

"What has also not changed is the unwavering, ironclad ROK-U.S. alliance that was ready then (last year) and remains ready now. This is our commitment to keep it that way well into the future," Brooks noted.

"We will not waver in our resolve and we will only continue to build upon the relationship between our countries as we go forward," the chief commander of the 28,500 American forces stationed in South Korea said.

His comments come ahead of the first summit between President Moon Jae-in and U.S. President Donald Trump in Washington D.C. next week where the leaders are expected to reaffirm their alliance under their new administrations.

"We do have a whole lot of high hopes that the meeting between Moon and Trump will yield a stronger ROK-U.S. alliance," Brooks noted.

Referring to the summit, South Korean Vice Foreign Minister Lim Sung-nam said in his speech during the dinner meeting that the leaders' meeting should become an opportunity to highlight the value of the alliance to the U.S. side.

"Our alliance is truly mutually beneficial. Korea has been making a substantial contribution in terms of (financial) burden sharing as exemplified by the USFK bases' relocation to Camp Humphreys," the vice minister said.

"In this regard, we hope that President Moon's upcoming visit would provide the U.S. public with an opportunity to better understand the enormous value of the alliance for Korea as well as the U.S.," he said.

Acting U.S. Ambassador to Seoul, Charge d'Affaires Marc Knapper, stressed continuing security threats from North Korea, saying that "the two counties must remain vigilant and work together to disrupt DPRK plans to threaten our peace and security." DPRK is the acronym of the North's official name, the Democratic People's Republic of Korea. 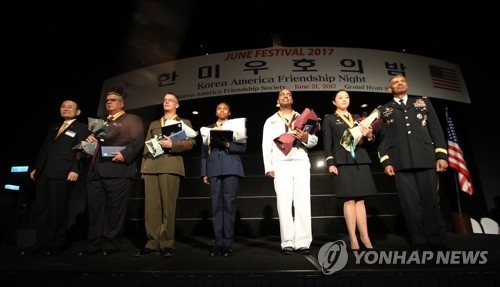