WASHINGTON, June 21 (Yonhap) -- The United States and China held high-level security talks Wednesday where North Korea is expected to be a top issue, especially in the wake of the death of an American college student following his comatose release from the North. 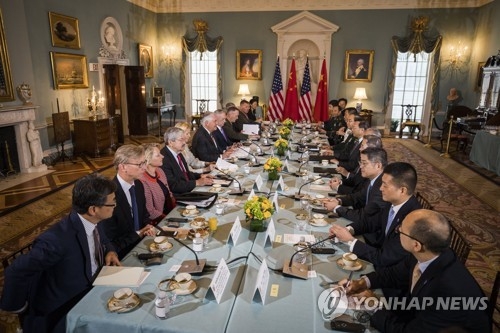 Earlier this week, Susan Thornton, acting assistant secretary of state for East Asian and Pacific affairs, told reporters that a top priority in this week's talks will be about ramping up pressure on North Korea so as to change Pyongyang's calculus over its nuclear and missile programs.

She said China has done a lot to increase pressure on the North, but should do more.

U.S. President Donald Trump said in a Tweet that China and President Xi Jinping tried to increase pressure on Pyongyang, but those efforts didn't work.

"While I greatly appreciate the efforts of President Xi & China to help with North Korea, it has not worked out. At least I know China tried!" Trump said.

Wednesday's talks came amid rising calls for tougher sanctions on the North after American college student Otto Warmbier died just days after he was released from North Korea in a coma following 17 months of detention for taking down a political propaganda sign from a hotel.

Trump has condemned the "brutality" of the North Korean regime and said Warmbier's death is a "total disgrace."