SEONGJU, South Korea, June 23 (Yonhap) -- Nestled in a hilly area of South Korea's southern region, Soseong-ri used to be a quiet village of elderly farmers. It was until last September when a golf course in the laid-back rural town was chosen as the site for a U.S. missile defense system. Weekly rallies and candlelight vigils have since continued near the community hall. Protests have escalated since the deployment began two months ago.

"THAAD (Terminal High Altitude Area Defense) turned our tranquil village upside down. I couldn't focus on my farming because I also have to come out to keep watch over the Americans," said Do Geum-nyon, an 81-year-old women who has been living in the village of Seongju county, 296 kilometers southeast of Seoul, since her marriage at 20.

She was one of some hundred protesters who collided with the police when the key elements of the THAAD battery were first brought to the deployment site in the wee hours of April 26, including a radar system and two interceptor missile launchers.

"Without THAAD, I would have no worries for the rest of my life. Now I am so exhausted because I am so nervous about THAAD," she said, referring to her recent juggling of rice and chili farming and protest activities. "I just hope we could live like we used to."

Protesters and villagers now take turns to stop and look into any vehicles that pass through the village's main road linking the residential and farming areas to the gold course. Any cars carrying fuel, American soldiers or other resources needed to operate the defense machine are blocked and sent back by the civilian guards.

In the face of the growing resistance, the U.S. military has recently switched from cars to helicopters to move fuel oil and soldiers to and from the site. Helicopter noise is one of many sources of distress for the farming village where the majority of the residents are women aged over 70.

Starting this week, a throng of protesters from outside of Soseong-ri launched near daily rallies in support of the THAAD deployment near the community hall, adding further tension in the village.

In their latest rally Thursday, the supporters of THAAD demanded the government immediately start the full deployment of the missile shield and its operation to bolster the defense of the country against North Korea's security threats. 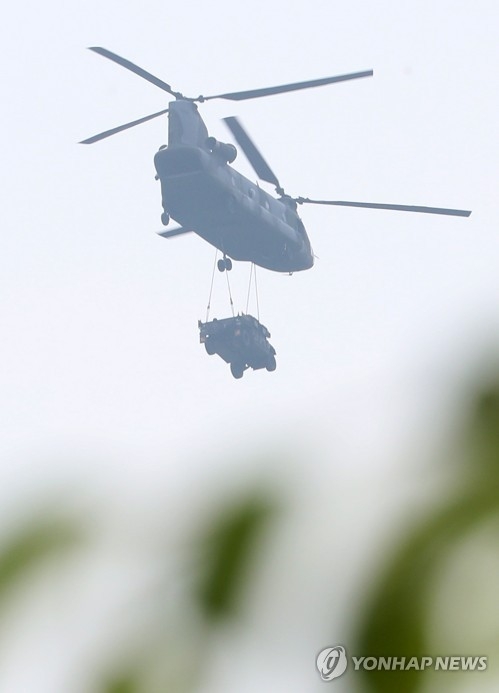 The dispute over THAAD emerged as the first key security challenge for President Moon Jae-in.

Since taking office on May 10, Moon put the brakes on the THAAD deployment which was agreed upon with the U.S. and put into implementation under the former administration of impeached President Park Geun-hye, to defend against North Korea's growing nuclear and missile threats.

Moon indicated that the remaining four of a THAAD system's total six interceptor missile launchers will be allowed for final deployment only after conducting an assessment of how the deployment would impact the environment. The U.S. wants the deployment to be completed before the end of 2017 as agreed upon with the former administration.

The villagers will be keenly watching the result of the summit between Moon and U.S. President Donald Trump to held in Washington D.C. next week. How they tackle the differences on the THAAD deployment is likely to define the two leaders' relationship going forward.

The two-lane road linking the THAAD site to the village's community hall is densely lined with angry banners, denouncing the deployment and calling for its immediate withdrawal. Tourist buses come and go near the community hall, carrying more protesters and volunteer workers into the village. 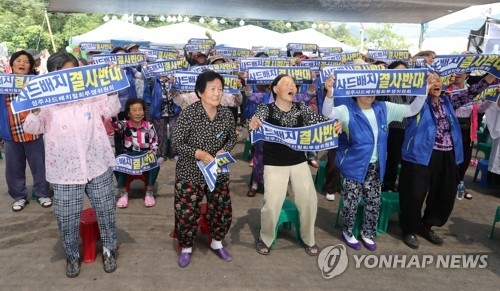 The villagers are concerned most about the possible impact THAAD will have on their health and the environment.

Lee Seok-ju, the 63-year-old headman of Soseong-ri, believes electromagnetic waves from THAAD's radar systems would surely get in the way of the activities of the region's honey bees whose pollination is critical to the harvest of the village's widespread chamoe, or Korean melon, planting. He has grown chamoe in the village for more than 30 years.

"The village is only two kilometers off from THAAD. Honey bees would fall under the influence of (THAAD) electromagnetic radiation, which will leave them unable to help bear fruits. The area of honey bees' activity spans about two kilometers," Lee said, adding that other environmental damage from lubricant and coolant needed to operate THAAD will also be inevitable.

Safety jitters and procedural issues are the other main reasons why Lee vowed to continue the village's protest.

The droning sound of the THAAD system could be heard in the village throughout the day while helicopters fly over constantly, keeping the old villagers in a state of anxiety, the village headman said.

"We, the village, hasn't had any explanation from the government (about the deployment), not even once, let alone an official test of environmental impact. It's against law," Lee said. "The livelihood of the village was put at risk.