SEOUL, June 22 (Yonhap) -- Girl group TWICE has unveiled the Japanese language music video of its hit song "TT" ahead of its debut in the Japanese market.

The group will also drop the Japanese-language debut compilation album of its best songs, titled "#TWICE" on June 28.

"TT," composed by Black Eyed Pilseung who previously worked with the group for "OOH-AHH" and "Cheer Up," depicts the perplexity of girls who fall in love for the first time.

Unlike the original Korean version music video reminiscent of Halloween, the members draw attention by performing cheerful dances in casual attire in the Japanese video.

In the video for "TT," in particular, the members expressed crying through choreography.

TWICE has received much attention from local media and fans ahead of its Japanese debut. In a survey conducted by a famous morning program on the Japanese Nippon TV about female students attending middle and high schools, 80 percent of the respondents answered they are aware of the Korean girl group.

After the release of the Japanese debut album, the group is to hold a showcase titled "TWICE Debut Showcase Touchdown in Japan" in Tokyo on July 2. 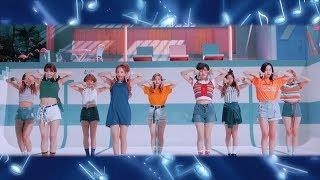