SEOUL, June 22 (Yonhap) -- The number of long-term unemployed people in South Korea reached a 13-year high in May, data showed Thursday, as companies were unwilling to hire amid uncertainties over their future and other reasons.

The country's long-term unemployed numbered 120,000 in May, accounting for 11.9 percent of total jobless and marking the highest figure for the month since 2004, according to the data from Statistics Korea.

Long-term unemployed refers to individuals who have been looking for work for six months or longer. The number of the country's long-term employed tends to hit a nadir in August and peak in September when large companies start their second-half hiring on a full scale.

In recent months, the number has been on a steady rise as local companies fret over future business conditions despite recent signs of a recovery in Asia's fourth-largest economy.

"The recent economic recovery is limited to exports and some other sectors, while relying on the construction sector in the first quarter, which usually hires short-term workers," said Sung Tae-yoon, an economics professor at Yonsei University in Seoul. 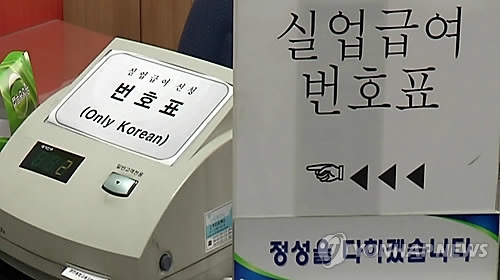 "Such a situation would have not been of much help to change a reality where the number of long-term unemployed people is rising," Sung added.

Some analysts said the government's push to convert temporary workers in the public sector into regulars may have made companies hesitant to make decisions on employment while sizing up its impact.

Others expected the implementation of an extra budget to help slightly reduce the number of the long-term unemployed. The government has submitted an 11.2 trillion won (US$9.8 billion) supplementary budget to the National Assembly, which is forecast to help create some 110,000 jobs.