SEOUL, June 22 (Yonhap) -- A state-run research institute will reconstruct a life-size version of a ship used by emissaries of the 1392-1910 Joseon Dynasty to sail to Japan by September next year to use it as a museum of traditional Korean ships, government officials said Thursday.

The National Research Institute of Maritime Cultural Heritage said it will hold a ceremony later in the day to launch the reconstruction of the "Joseon Tongsinsa" ship at a shipyard in Yeongam on South Korea's southwestern coast.

Joseon Tongshinsa refers to a series of diplomatic goodwill missions that the Joseon court sent to the Edo Shogunate. Between the 17th and 19th centuries, the missions were sent as part of efforts to re-establish ties between the two countries following the Japanese invasion of Korea that took place from 1592-1598.

Joseon sent envoys 12 times from 1607-1811, and 400 to 500 government officials, interpreters and medical experts took part in the journey on each expedition in a convoy of six ships. During the 2,000 km journey, the envoys first traveled overland from Seoul to the South Korean coastal city of Busan to embark for Japan. 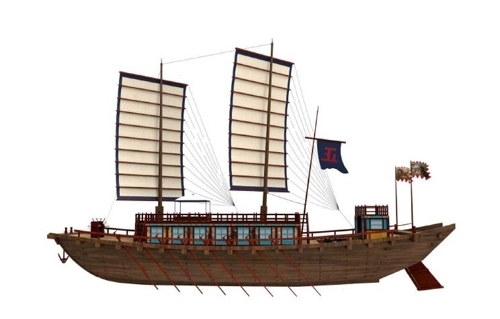 The research institute, which has obtained old records detailing data of the ship, said the envisioned ship will have a weight of 137 tons, length of 34.5 meters, width of 9.3 meters and depth of 3 meters.

It will be made of pine and oak trees from the country's northeastern province of Gangwon.

The ship, when reconstructed, will serve as a museum displaying information on the Joseon Tongshinsa ship and the dynasty's other ships and will be operated during festivals celebrating the envoys that South Korea and Japan hold every year.