SEOUL, June 22 (Yonhap) -- South Korea on Thursday cast caution over reading too much into a North Korean envoy's remarks proposing a conditional moratorium on the North's nuclear and missile tests.

North Korea's top envoy to India Kye Chun-yong said Wednesday that North Korea can place a moratorium on its nuclear and missile tests if the U.S. suspends its annual joint military drills with South Korea.

It marked the first time that the North raised the possibility of the conditional suspension of its nuclear and missile provocations since liberal President Moon Jae-in took office in May. 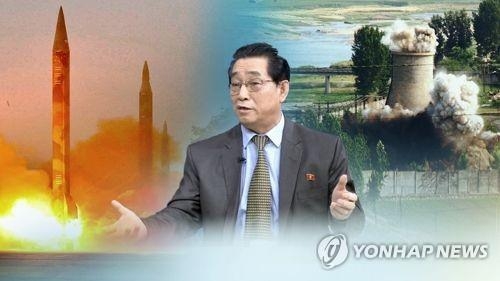 South Korea's unification ministry expressed prudence about giving its assessment over Kye's remark, saying that North Korea made a similar proposal in January 2015.

On Jan. 10, 2015, North Korea proposed that it would temporarily suspend its nuclear testing if the U.S. halted its joint military exercises with the South that year.

"North Korea made a similar offer in 2015. We will closely watch the situation," said a ministry official. "I think that North Korea is seen as giving its views in various manners as the outside world is talking about its nuclear weapons program."

Kye's remark came as Moon said in a recent interview with CBS that South Korea has no plans to scale back joint military exercises between Seoul and Washington.

The president's comment came after his special security adviser Moon Chung-in told a forum in Washington that Seoul and Washington may consider scaling back their joint military drills in exchange for North Korea freezing its nuclear and missile programs.

Pyongyang has long denounced the joint military drills between South Korea and the U.S. as a rehearsal for a northern invasion despite Seoul and Washington's assurance that they are defensive in nature.

Meanwhile, the ministry official said that reported new activity at North Korea's underground nuclear test site does not seem to be related to signs of an additional nuclear test by the North.

"It does not appear to be directly related to (signs of) another North Korea nuke test," the official added. "But North Korea seems to be ready to conduct an additional nuke test at any time."