SEOUL, June 22 (Yonhap) -- South Korea on Thursday repatriated the remains of an apparent American soldier killed in the Korean War, a show of the allies' commitment to never forget the wartime sacrifice of their troops.

The remains were discovered in Yeongdong, a small village in North Chungcheong Province, at the end of March.

Based on an initial analysis, the Ministry of Defense Agency for KIA Recovery & ID (MAKRI) identified the remains belonging to a U.S. service member. The area was a fierce battlefield in the early month of the three-year conflict that began June 25, 1950.

A unit of the U.S. Army's 1st Cavalry Division fought there against the invading North's armed forces under the flag of the United Nations Command (UNC).

The remains will be sent to the Joint POW/MIA Accounting Command in Hawaii for a final analysis and delivered to the bereaved family if confirmed. 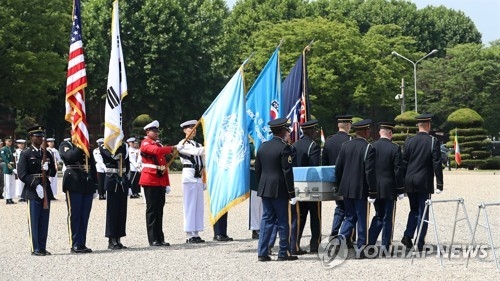 "The Korean War is not a forgotten war any more. The South Korean government will do its best until the remains of all fallen soldiers who participated in the Korean War are located," Maj. Gen. Ro Hui-jun, director general of the defense ministry's mobilization planning bureau, said during a repatriation ceremony held at Knight Field in the U.S. Army Garrison Yongsan in Seoul.

The U.S., a key element of the 21-state U.N. troops at that time, dispatched 1.79 million service members and more than 33,000 of them were killed in action, with more than 8,000 others missing in action, according to official data.

UNC officials stressed that those "fallen heroes" deserve credit for the country's current freedom and liberty.

"We are here to bid farewell to a serviceman who fought under the flag of the United Nations Command who came from one of 21 sending states to a land far away to defend the Republic of Korea after an unprovoked attack by the North," said UNC Chief of Staff, Maj. Gen. Michael A. Minihan. "In this short and powerful moment, we reflect on the service and sacrifice that preceded us." 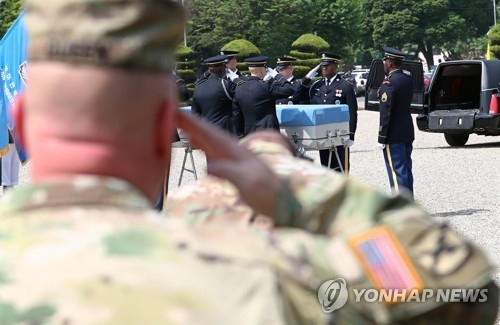 He took note of the timing of the repatriation, which comes three days ahead of the anniversary of the outbreak of the war 67 years ago.

"The service member we honor will finally return home from this war, from his world to a country and to the home and to the family he loved," he said.

The allies have yet to find the remains of around 140,000 South Korean troops who lost their lives during the war and those of more than 8,000 American soldiers.

"Our mission on the Korean Peninsula is far from finished. We have thousands of missing left to locate," said John E. Byrd, director of the U.S. Defense POW/MIA Accounting Agency Laboratory. "However, it gives us and the family solace to know that people here from all sides are still working hard to find and recover those who have not returned home from their ultimate sacrifice."