SEOUL, June 22 (Yonhap) -- South Korea's parliament on Thursday passed a resolution calling for the reunions of families separated across the inter-Korean border in time for Liberation Day in August.

The reunions of families, mostly divided since the 1950-53 Korean War, have not been held since October 2015 amid heightened tensions caused by Pyongyang's unceasing provocations, including two nuclear tests last year.

"The reunions of the families are the starting point for joint efforts to restore mutual trust and improve bilateral relations, and this is a humanitarian issue that goes beyond ideologies," Rep. Shim Jae-kwon of the ruling Democratic Party said during the National Assembly's plenary session. He chairs the parliamentary foreign affairs committee.

The legislature also passed a revision to the Political Fund Act, which revives each political party's fund-raising role. This role was abolished in 2006 after a party was embroiled in a massive illicit funding scandal. Following the abolition, each party had received funds through the National Election Commission.

Under the revised act, each party can raise up to 5 billion won (US$4.38 million) a year from individual supporters, who can each donate up to 5 million won a year. Corporate bodies are still banned from making any political donations. 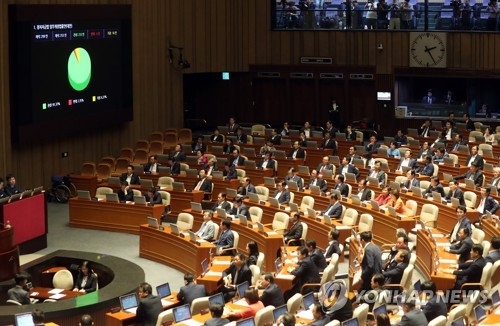