SEOUL, June 23 (Yonhap) -- Slovenia is actively considering the idea of establishing a resident embassy in South Korea, the country's chief envoy to Seoul has said, as the two countries are set to celebrate the 25th anniversary of their diplomatic ties this year.

"Having a resident embassy here is something that the Slovenia government has been thinking about very actively for years and it's the same on the Korean side," Ambassador Simona Leskovar, who is doubling as Slovenia's envoy to South Korea and Japan, said in a recent interview with Yonhap News Agency in Seoul.

Currently, Slovenia has no embassy in South Korea and the ambassador is operating from Slovenia's Embassy in Tokyo.

"Final decision depends on finances, but it's something that's in the pipeline in our government and in the Korean government," she said. "Hopefully, it will come to fruition one day soon."

The ambassador said that in her latest visit to Seoul this week, she conveyed the Slovenian government's invitation for new South Korean Foreign Minister Kang Kyung-wha to an annual Slovenian government forum, the Bled Strategic Forum on foreign policy set for September.

"We are hoping that the minister of the Republic of Korea would participate in the event in Slovenia," she said, stressing that nuclear governance, non-proliferation and human rights issues will be key topics of discussion in the forum.

"We'd like to hear the South Korean stance and viewpoint on that and also what's the development on the (Korean) peninsula concerning ... the new government,' the ambassador said.

"This is another opportunity and it's high time that we have a visit from South Korea to Slovenia ... (as) we will celebrate the 25th anniversary of diplomatic relations between Slovenia and the ROK," she also noted, referring to the countries' diplomatic anniversary which falls in November.

Foreign ministers of the two countries last met in 2015 in Seoul while the latest visit to Slovenia by a South Korean foreign minister was in 2005, according to her.

Leskovar stressed that Slovenia wants to lure more South Korean investment to her country, especially in the logistics sector, and more exchanges in the tourism front.

"We have the Port of Koper, the shortest sea route from East Asia to Central and Southeastern Europe. We cooperate with the Korean side through that port a lot, but there is potential to upgrade this cooperation," she said.

She also cited Slovenia's four seasons and diverse landscapes as well as the country's hosting of the Alps and Adriatic Sea as tourist charms of her country, saying Slovenia would like to welcome more South Korean tourists.

"Slovenia is the only country in the world that has 'love' in its name. So come and feel love. It's a really lovely country," she said.

Touching on the security threats North Korea is posing to South Korea and its surrounding region, the ambassador also said, "We are extremely worried about what is going on. It's our firm position within the United Nations and the European Union that these provocations need to stop and the country needs to abide by international law and U.N. Security Council resolutions."

Also recalling her previous acquaintance with Minister Kang from their shared terms at the U.N., the ambassador said, "I am encouraged with the fact that she is a multilateralist."

"When you encounter very dedicated multilateralists, you know that they are working wholeheartedly for greater causes and I am sure she is definitely one of them," she added. 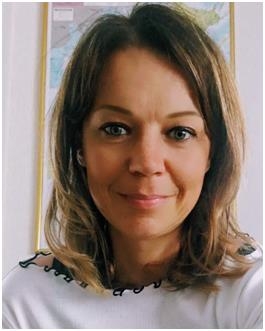