The website, www.mfa.gov.kp, reveals that the ministry is composed of 11 bureaus that are divided by region and role.

"The website will help promote understanding of the DPRK's foreign affairs and policy and contribute to boosting the relations of good-neighborliness, friendship and cooperation between the DPRK and other countries in the idea of independence, peace and friendship," the Korean Central News Agency said in an English dispatch monitored in Seoul. DPRK is the acronym of North Korea's official name, the Democratic People's Republic of Korea.

Other bureaus are tasked with public relations, consular affairs, treaties and international organizations, among other areas.

Under the ministry, there are three institutes to conduct research on disarmament and peace issues, U.S. affairs and Japan affairs.

The website can be viewed in either Korean or English and includes sections for news, photos and the ministry's official statements.

In the news section, there are KCNA articles on the release of Otto Warmbier, an American college student who was released last week in a coma after spending 17 months in detention in the North.

Warmbier died in the U.S. earlier this week.

A North Korean defector who worked as a diplomat in his home country raised the possibility that some departments may not have been disclosed on the website.

"It's possible that they only revealed those (departments) that can be made public," he said on the condition of anonymity. 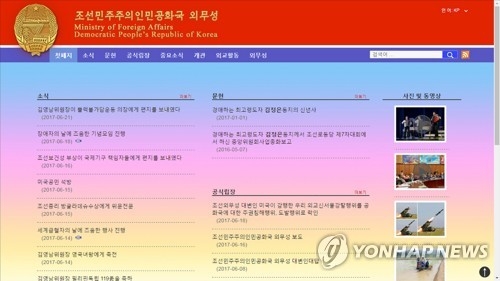