SEOUL, June 22 (Yonhap) -- The United States understands what it sees as a "diplomatic process" underway for the deployment of its advanced missile defense system in South Korea, its top diplomat said Thursday.

U.S. Secretary of State Rex Tillerson made the comment during a conversation with his South Korean counterpart Kang Kyung-wha over the phone.

"(We) respect a diplomatic process," Tillerson said, in response to Kang's explanation that there is domestic demand for due process in deploying the Terminal High Altitude Area Defense system on the Korean Peninsula, according to the foreign ministry here.

Kang said that the recent suspension of installing the THAAD system is intended to take "internal" steps to ensure its democratic process and legitimacy, the ministry said.

This marked the first phone conversation held between the top diplomats of South Korea and the U.S. since their inaugurations.

The THAAD deployment has been suspended as President Moon Jae-in underlined the need for due process including a review on its environmental impact, a decision that is raising speculation that South Korea might be considering suspending or scrapping its deployment. The Seoul government has repeatedly denied that possibility.

The phone talks between Kang and Tillerson came days before their leaders -- Moon and Donald Trump -- are set to hold their first summit talks in the U.S.

For the upcoming talks, Kang was quoted as saying that the two leaders will have "chemistry" that will serve as a basis for cooperation between the allies in the years to come, saying that both of the new leaders are "pragmatic."

Tillerson responded that Trump is looking forward to Moon's planned trip, calling for close communication between the two anytime when it's necessary, according to the ministry. 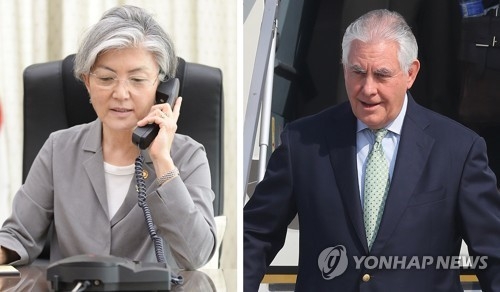