SEOUL, June 22 (Yonhap) -- A special adviser to President Moon Jae-in on Thursday called for flexibility on the North Korean nuclear issue, saying it is unrealistic to expect the communist nation to denuclearize before coming to talks.

Moon Chung-in, a special adviser for unification, foreign affairs, and national security issues, made the remarks in an interview with Yonhap News TV, arguing that South Korea could take steps to ease cross-border tensions.

"We need to be a bit flexible," Moon, a professor at Seoul's Yonsei University, said. "The reason North Korea tests nuclear weapons and missiles is because they feel threatened. If we slightly scale back South Korea-U.S. military drills and do not forward deploy U.S. strategic weapons, tensions will be eased and then we can assume that North Korea will not carry out provocations."

The adviser created controversy after he recently told a forum in Washington that the allies may consider scaling back military exercises in exchange for North Korea freezing its nuclear and missile programs.

"I was suggesting an alternative as there are such arguments in the U.S.," he said.

He warned that "time is not on our side" as North Korea conducts successive nuclear and missile tests and that once the communist regime acquires an intercontinental ballistic missile, the problem will be much worse.

"North Korea is assumed to have about 20 nuclear warheads and missiles as delivery vehicles. It's unrealistic to insist that we won't hold talks with them unless they denuclearize (first)," he said. "We need to be more realistic and talk to them and give them incentives if they freeze their nuclear and missile programs."

In such a case, there will be a breakthrough in the impasse over North Korea's nuclear program, he added. 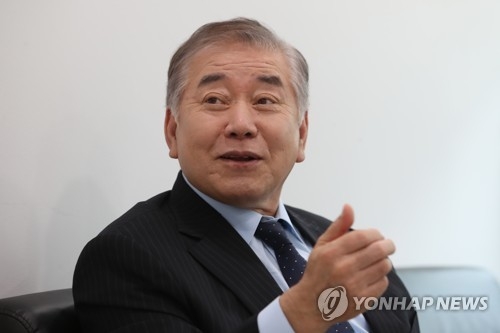