WASHINGTON, June 22 (Yonhap) -- U.S. President Donald Trump will do "whatever it takes to protect America" from North Korean threats if Chinese efforts to rein in the provocative regime don't work, the White House said Thursday.

Deputy Press Secretary Sarah Sanders made the remark during a press gaggle in response to a question about Trump's Twitter posting earlier this week that China tried to help the U.S. with the North, but those efforts didn't work.

Since his first summit with Chinese President Xi Jinping in April, Trump has repeatedly praised China for trying to increase pressure on North Korea while refraining from labeling Beijing a currency manipulator for fear it could hamper efforts to enlist Chinese help in reining in the North.

"They certainly have a role to play. They're a very large economic partner with North Korea," she said. "We continue to look to China and ask China to do more to fully adhere to and administer, if you will, the sanctions in place against -- against North Korea. We call on China, as we do many, many nations, to do more."

Nauert declined comment on a proposal from the North Korean ambassador to India that Pyongyang could suspend nuclear and missile testing if the U.S. halted joint military exercises with South Korea.

"I don't have a response to that, but the DPRK knows what they need to do in order to get the United States to work with them. And they know that has to be denuclearization. The secretary has said he's not going to negotiate his way back to the negotiating table," he said. 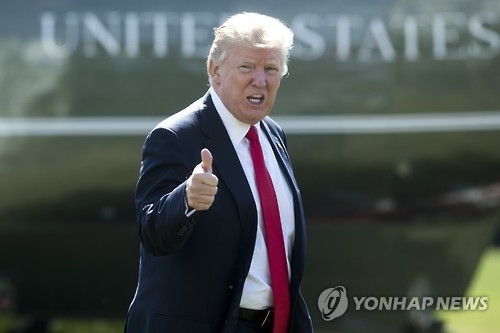 (LEAD) Trump will do 'whatever it takes' to defend U.S. from N. Korea: White House

(LEAD) Trump will do 'whatever it takes' to defend U.S. from N. Korea: White House