SEOUL, June 23 (Yonhap) -- The United States will not stop the Seoul-Washington joint military drills as a concession for North Korea's suspension of missile and nuclear tests, Voice of America reported Friday.

Adams was also quoted as saying, "Our military exercises are carried out in the spirit of the Oct. 1, 1953, U.S.-ROK Mutual Defense Treaty and are carefully monitored by the Neutral Nations Supervisory Commission to ensure full compliance with the 1953 Armistice Agreement." 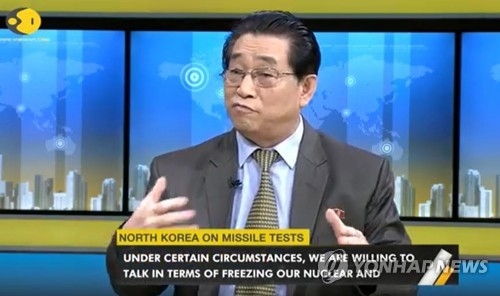 The U.S. official's remarks came after North Korean Ambassador to India Kye Chun-yong said Wednesday that Pyongyang is willing to talk in terms of freezing its nuclear and missile tests under certain circumstances that include the halt of the U.S. joint military drills with South Korea.

"If our demands are met, we can negotiate in terms of the moratorium of such as weapons testing," Kye said in English in an interview posted on the website of India's television station WION.

Speaking on condition of anonymity, another official at the State Department criticized Kye for trying to exchange something unlawful for something lawful, VOA said.

Adams also said the U.S. leaves open the possibility of holding talks to achieve the goal of a denuclearized Korean Peninsula and the North has a responsibility to take sincere and meaningful actions toward denuclearization and refrain from making additional provocations.