In the survey conducted from Tuesday through Thursday by local pollster Gallup Korea, Moon's rating was tallied at 79 percent, down 4 percentage points from a week earlier.

Those who disapproved of his job performance made up 14 percent, up 4 percentage points from the previous week, while 7 percent said they were unsure or refused to answer.

Over the past week, a political stalemate over some of Moon's ministerial nominees showed no signs of abating.

Justice Minister designate Ahn Kyong-whan renounced his nomination last Friday amid brewing controversy over his alleged ethical lapses, including his fraudulent marriage registration in 1975 and purportedly sexist comments in his books.

Moon also pressed ahead with the appointment of Kang Kyung-wha as foreign minister despite opposition parties' objections over a series of her alleged misdeeds, such as false address registration for her daughter.

In the latest survey, support for the ruling Democratic Party remained unchanged at 50 percent, while the rating for the main opposition Liberty Korea Party decreased one percentage point to 9 percent.

The ratings for the People's Party, Bareun Party and Justice Party were tallied at 7 percent each.

The survey was conducted on 1,004 adults across the country and had a margin of error of 3.1 percentage points, with a 95 percent confidence level. 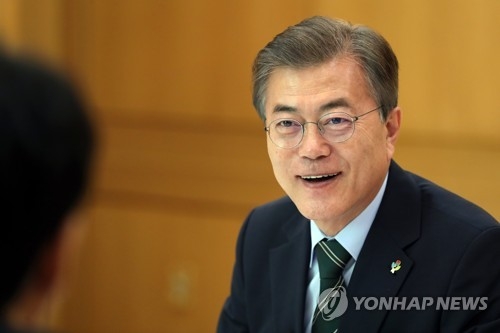