The combined sales from 3.87 million companies checked reached 5,311 trillion won (US$4.66 trillion) in 2015, up from 4,332 trillion won tallied in 2010, according to the data compiled by Statistics Korea. It is based on a business census covering all businesses and enterprises in South Korea that was carried out June through July of 2016.

The real estate sector saw its sales soar 65.5 percent over the five-year period on the back of a boom in the property market, while sales in the health care and social welfare sectors vaulted 56.3 percent.

The manufacturing sector, the backbone of Asia's fourth-largest economy, posted 1,694 trillion won in sales in 2015, accounting for 31.9 percent of total sales.

But their operating profit fell 3.2 percent to 349 trillion won over the same period, with the operating profit ratio dropping 1.7 percentage points to 6.6 percent in 2015, the findings showed.

Operating profit of manufacturing businesses fell 22 percent to 129 trillion won as the country's exports, closely linked with the manufacturing industry, fell 8 percent in 2015 due to weak global demand. 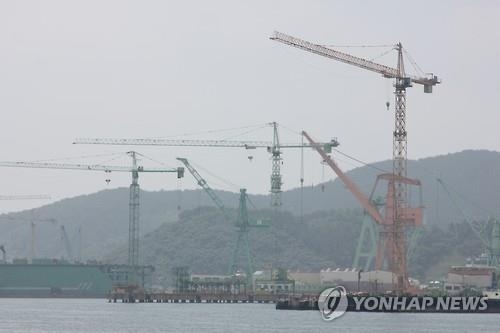