SEOUL, June 23 (Yonhap) -- The friend of former President Park Geun-hye mired in a massive corruption scandal was sentenced to three years in jail on Friday for soliciting academic favors for her daughter, the first ruling handed down for part of the nation-rocking case that led to Park's ouster.

The Seoul Central District Court found Choi Soon-sil guilty of obstruction of duty by exerting influence on Ewha Womans University to give undue favors for her 21-year-old daughter, Chung Yoo-ra, using her ties with the former president.

The court also sentenced Choi Kyung-hee, ex-president of the university, and Namkung Gon, the university's former head of admissions, to two years and 1 1/2 years in prison, respectively, for complying with her requests.

The court acknowledged that she ignored the law and procedures for her daughter's success, and that she took it for granted that others should help her achieve this purpose.

Choi, 61, is accused of colluding with the university officials in 2015 in admitting her daughter, a then equestrian athlete, into Ewha as a gifted in sports.

She is also accused of demanding professors give her daughter grades for papers Chung never submitted or exams that she never took.

The court ruling is the first made for one of the many charges Choi faces in connection with the influence-peddling scandal. Her charges include suspected bribe-taking worth at least 7.8 billion won (US$6.85 million) from Samsung. Park and Samsung Group heir Lee Jae-yong are also detained and facing trials.

In late May, the prosecution asked the court for a seven-year imprisonment for Choi and shorter jail terms for the others. 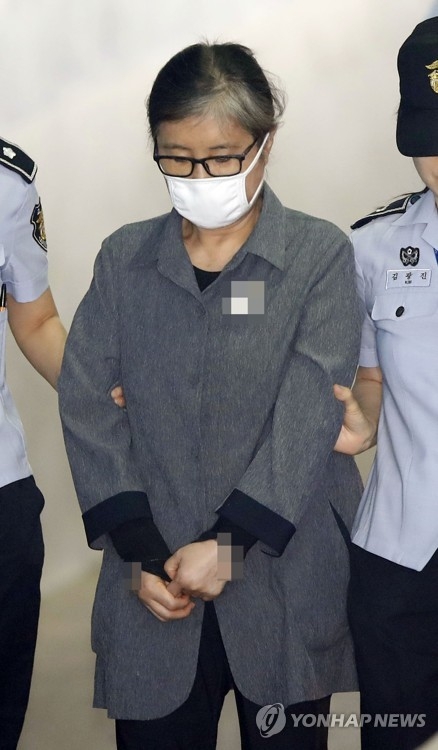