SEOUL, June 23 (Yonhap) -- South Korea said Friday that it is closely monitoring North Korea's missile development in cooperation with the United States amid a news report that the North has conducted another rocket engine test.

Earlier this week, North Korea conducted the test of a rocket engine that could be seen as part of the North's program to develop an intercontinental ballistic missile (ICBM), Reuters reported, citing unnamed U.S. officials.

The official was quoted as saying that it could be for the "smallest stage of an ICBM rocket engine." A few other foreign news outlets carried similar reports based on information from their own sources.

"South Korea is closely monitoring the situation under the collaboration with the U.S.," said Lee Eugene, vice ministry spokesperson, at a regular press briefing.

The South's military would not confirm the report of the secretive neighbor's move.

"We are keeping close tabs on the possibility," a Joint Chiefs of Staff official told reporters.

Responding to Yonhap News Agency's query, a U.S. defense official also said, "We watch North Korea's actions closely. But we will not comment on intelligence."

He added, "We call on the DPRK (North Korea) to refrain from provocative, destabilizing actions and rhetoric, and to make the strategic choice to fulfill its international obligations and commitments and return to serious talks." 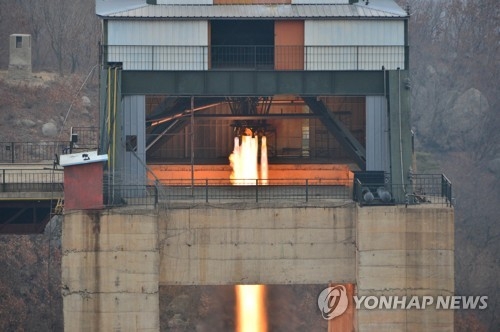 North Korea has not announced any new rocket engine test yet.

Its state media said on March 19 that it succeeded in testing a high-thrust rocket engine at a missile site near the border with China, indicating it was conducted a day earlier.

The North's leader Kim Jong-un described it as a "revolutionary breakthrough" for the nation's space program, according to the Korean Central News Agency.

If confirmed, the North's move marked the first time since March that it carried out a ground test of a new high-thrust rocket engine.

The news of the North's latest rocket engine test, possibly for the second or third stage of a missile, came amid concern that it has nearly obtained full technology for an ICBM capable of hitting the U.S. mainland.

It may test-fire an ICBM in the near future as its missile development is apparently progressing at an alarming pace, observers said.
sooyeon@yna.co.kr
lcd@yna.co.kr
(END)