SEOUL, June 25 (Yonhap) -- South Korean President Moon Jae-in is set to meet his U.S. counterpart Donald Trump this week with the meeting expected to set the tone for the future of the alliance amid escalating North Korean threats and growing geopolitical uncertainties.

The new South Korean president will hold the two-day talks in Washington on Thursday and Friday (U.S. time). He will head for the United States on Wednesday for his first-ever summit with a foreign leader.

Their meeting will likely entail somewhat painstaking discussions on many urgent issues, such as North Korea's evolving nuclear and missile capabilities and the currently suspended deployment of the U.S. missile shield to South Korea.

However, officials from South Korea's presidential office Cheong Wa Dae note the most important and urgent issue, if not an outcome, of the summit may be for the two leaders of the allied countries to "hit it off."

"The alliance has always remained strong, but we still have seen the alliance affected by the personal relationship between the countries' leaders," a Cheong Wa Dae official said, asking not to be identified.

Cheong Wa Dae has repeatedly expressed the hope that Moon and Trump will come to be more than just colleagues.

"We hope the two leaders will strengthen their personal trust and relationship while sharing a joint vision to further develop the Korea-U.S. alliance into a greater one," Cheong Wa Dae spokesman Park Soo-hyun said earlier. 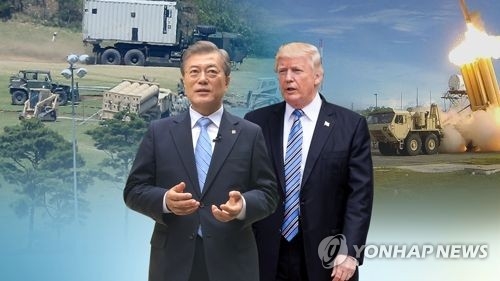 Moon's election as South Korea's new president had many in the two countries nervous as his liberal views on how to approach the provocative North seemed to differ from those held by President Trump, widely considered to be hawkish even among strong critics of the communist North.

The South Korean president recently sought to remove such concerns when he stressed a need to resume dialogue with Pyongyang while saying such a move will only be possible after the reclusive regime freezes its nuclear and missile activities.

He has even called for additional sanctions against the North if North Korea conducts a sixth nuclear test or stages an intercontinental ballistic missile test.

North Korea has staged five missile tests for intermediate and medium-range missiles since Moon came into office on May 10.

Those close to Moon insist he and Trump, despite their seemingly different personalities, might just hit it off when they meet in Washington this week.

One Cheong Wa Dae official said Trump appeared to be surprisingly "gentle" and "considerate", unlike how he appears or is portrayed in the media, when he called Moon to congratulate the latter on the very evening of his inauguration, as the first foreign leader to do so.

Still, many thorny issues await the two heads of state in their first meeting.

One of the most concerning issues for South Korea is a possible renegotiation of the Korea-U.S. free trade agreement.

Though President Trump recently remained silent over the issue, he has consistently stressed a need to renegotiate the deal since coming into office late January, once calling it a "horrible deal."

The deployment of the THAAD U.S. missile defense system to South Korea is another key topic for the upcoming summit.

President Moon earlier stressed the temporary suspension did not mean any change in his country's decision to host the U.S. missile shield, designed to protect U.S. troops stationed in South Korea, as well as the country itself.