SEOUL, June 23 (Yonhap) -- South Korea's new culture minister said Friday he will support the country's tourism industry which has been hit by Beijing's trip restriction over a diplomatic row with the Seoul government.

During his meeting with industry officials, Culture Minister Do Jong-hwan said he will improve the country's holiday system to boost demand for travel and invigorate the local tourism industry.

"Above all, we need to improve the country's vacation system so that people can have more time to travel and rest," Do said at the Seoul office of the Korea Tourism Organization (KTO). "We will prepare various tour programs for different life stages and make sure traveling can become a natural part of our life."

The remarks came as the country's tourism industry is suffering from a sharp decline in the number of tourists after the Chinese government banned its travel agencies from selling Korea-bound package tours in an apparent retaliation over the deployment of a U.S. missile system here.

The number of Chinese tourists dropped 66.6 percent in April after the ban took effect from mid-March.

The decision dealt a blow to the local travel industry, which has heavily relied on Chinese demand. Visitors from the neighboring country accounted for 46.8 percent of all foreigners coming to South Korea last year.

During the gathering, an industry representative asked the government to promptly resolve the issue, saying that 161 tourism firms that have catered to Chinese visitors are in effect open without any business at the moment. 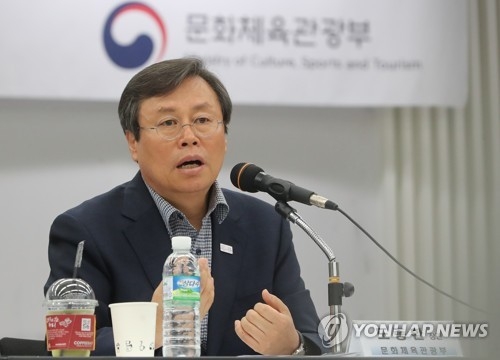