SEOUL, June 23 (Yonhap) -- The U.S. Forces Korea (USFK) said Friday it has an "original" agreement with South Korea to deploy the THAAD missile defense system here as soon as possible.

It was in response to President Moon Jae-in's view that the deployment process has been "accelerated for some reason" that he does not know.

He has apparently questioned the transparency of the related procedures, especially at home.

She would not discuss specifics on the timeline, however, citing "operational security reasons."

The official stressed that the U.S. "trusts" South Korea's official stance that the THAAD deployment was an "alliance decision."

"We have worked closely and have been fully transparent with the ROK government throughout this process," she said, using the acronym for South Korea's formal name, the Republic of Korea.

It's rare for the USFK to issue a statement on the sensitive THAAD issue. It usually leaves it to the Pentagon or refers media to South Korea's defense ministry.

It came a day after a foreign news report said that Moon, a liberal leader who took office in early May, took issue with the timeline of the deployment of the U.S. strategic asset on the peninsula.

In an interview with Reuters, Moon was quoted as saying that just one THAAD interceptor launcher was originally scheduled to be installed this year, with five others to arrive in 2018. 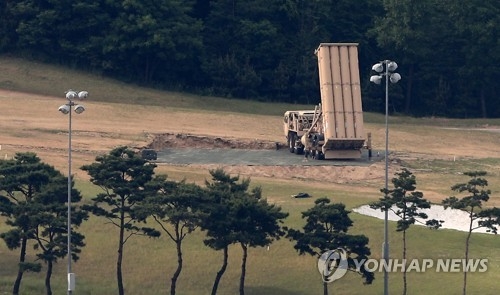 In fact, two THAAD rocket launchers are in place at a former golf course in Seongju, North Gyeongsang Province. Four others were brought to South Korea earlier this year and stored at a local USFK base.

Work on the THAAD installation has been suspended as the Moon administration is reviewing the relevant domestic procedures including the scope of a new environmental impact assessment.

The THAAD issue is expected to be high on the agenda when Moon holds his first summit talks with U.S. President Donald Trump in Washington D.C. next week.

Moon told Reuters that he will request that Chinese President Xi Jinping lift Beijing's measures of economic retaliation against Seoul in connection with THAAD, when they have a chance to meet in Germany next month on the sidelines of a G-20 summit.

South Korea and the U.S. reached a deal on deploying a THAAD battery on the peninsula in March last year, two months after North Korea's fourth nuclear test. South Korea was under the administration of a conservative president, Park Geun-hye, who was impeached later amid a bribery and influence-peddling scandal.

A THAAD battery is known to require at least six truck-mounted launchers. Eight interceptors are loaded per launcher as they can be fired and rapidly reloaded, according to the U.S. Missile Defense Agency.

It also comes with a powerful X-band radar, which searches, tracks, discriminates objects and provides updated tracking data to the interceptor, a battery support center and a fire control & communication system.