SEOUL, June 23 (Yonhap) -- Ryu Hyun-jin of the Los Angeles Dodgers got a no-decision despite a solid start as his bullpen failed to protect a lead.

Ryu gave up two earned runs against the New York Mets on five hits, including two home runs, in five innings at Dodger Stadium in Los Angeles on Thursday (local time). With the Dodgers leading 3-2 in the sixth inning, the South Korean left-hander handed the reins over to Chris Hatcher, who allowed the Mets to pull even in the same inning. The Dodgers eventually won the game 6-3.

Ryu made 86 pitches, 52 of them for strikes. He struck out three and walked two.

Pitching on four days' rest, Ryu gave up a leadoff home run to Curtis Granderson in the top of the first inning. But Ryu settled down to retire the next three batters in order. 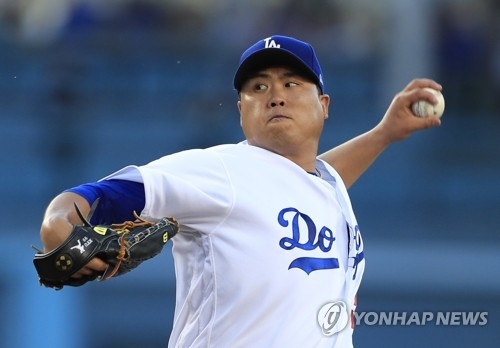 Ryu got some defensive help in the second inning to keep it a one-run deficit for the Dodgers.

Ryu walked Lucas Duda with one out and a wild pitch moved him to second. Jose Reyes then sent a sharp grounder down the third baseline, but third baseman Justin Turner made a diving grab to keep it to a single.

Gavin Cecchini hit a fly to center, and Kike Hernandez made the catch and gunned down Duda at the plate to complete the inning-ending double play.

The Dodgers took a 3-1 lead with three runs in the third, but Ryu allowed his second home run of the game in the fourth, when Travis d'Arnaud jumped on a 3-2 changeup for a solo shot that cut the deficit to 3-2.

Ryu has now allowed 14 home runs in 67 innings this season, one shy of a career high set in his rookie year in 2013, when he tossed 192 innings.

Ryu got into a jam in the fifth as the Mets had men at first and second with one out but got Wilmer Flores to hit into a 6-4-3 double play.

Hatcher couldn't hold the one-run lead for the Dodgers, as Duda hit a two-out double in the sixth to tie the score at 3-3.

The Dodgers reclaimed the lead by scoring three runs in the bottom seventh, thanks to Joc Pederson's solo home run and two bases-loaded walks issued by Jerry Blevins. Kenley Jansen got the final four outs for his 16th save of the season.

While Ryu held the Mets to two runs, he needed a more dominant outing to solidify his position in the Dodgers' rotation, with Kenta Maeda, exiled to the bullpen, ready to replace Ryu at any moment. Manager Dave Roberts has juggled his starters all season, sending a few to the bullpen or the 10-day disabled list along the way.