"I called for this meeting to ask businesses to make changes and set an example," Fair Trade Commission (FTC) Chairman Kim Sang-jo said before the talks with leaders of the four biggest conglomerates.

South Korea's conglomerates have been under fire for years as they largely rely on controversial cross-shareholding arrangements among their affiliated companies to strengthen their owner families' control over the entire group.

Kim said the four companies have failed to meet the expectations of the market and society although the fast-changing global and local economic environment requires a more transparent and open decision-making process.

"A few companies have become world-leading businesses, but many people are still making ends meet," the senior official and former civic activist who has advocated for greater rights for minority shareholders. "I don't think every company should be blamed, yet there is a need to look back and reflect."

The FTC head, on the other hand, said he will be supportive in company's taking action, as he has no plans to be pushy, and strives to be coherent and predictable.

"I will listen, talk and give full support," Kim said. "As the head of the FTC, I will be patient enough to wait for the businesses to make the necessary changes." 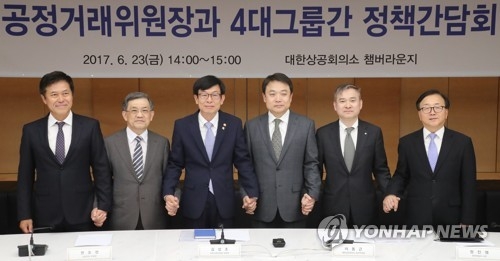