Choue ran unopposed for the top position at the World Taekwondo Federation (WTF) in an election held during the WTF General Assembly in Muju, some 240 kilometers south of Seoul. Muju will host the 23rd WTF World Taekwondo Championships starting Saturday.

"I solemnly and humbly accept your vote of confidence," Choue told the WTF members gathered at Muju National Sports Center. "I look forward to serving the world of taekwondo for another four years. I'll try to fulfill all the pledges."

Choue, 69, replaced then-incumbent Kim Un-yong in 2004 to complete the remainder of Kim's term following his arrest for embezzlement and bribery allegations. Choue was then re-elected in 2005 for a four-year mandate, and won the next two elections in 2009 and 2013.

Choue was also the sole candidate in the 2013 vote and earned unanimous support. 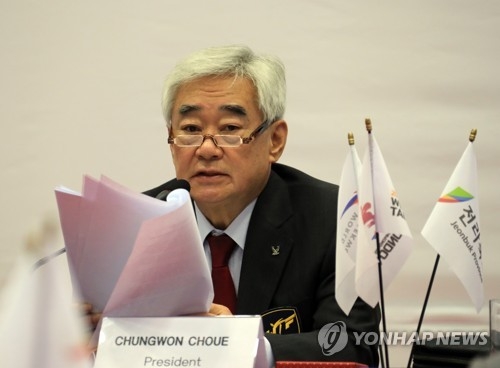 On Choue's watch, taekwondo has undergone several rule changes designed to help the sport be more entertaining. For last year's Summer Olympics in Rio de Janeiro, the WTF introduced headgear equipped with electronic sensors. Chest protectors with sensors were put in play for the 2012 London Games.

And an octagon-shaped competition area was used at an Olympics for the first time in Rio, with the WTF saying it would help reduce blind spots for referees and ensure more accurate judging.

"We've upgraded our field of play, our equipment and our rules," Choue said. "We've overseen a flawless Olympics in Rio. We've seen para-taekwondo incorporated into the Paralymics in Tokyo in 2020. Our vision is to become a benchmark international federation within the Olympic Movement. We'll upgrade our focus on our athletes, and we'll reach out to them to hear what they most want and need."