SEOUL, June 25 (Yonhap) -- The leaders of South Korea and the United States are expected to face a tough task of coordinating what appears to be their differences in dealing with North Korea when they meet in Washington this week, experts said Sunday.

North Korea's growing nuclear and missile threats are seen to top the agenda for the summit between Presidents Moon Jae-in and Donald Trump to be held on Thursday and Friday (U.S. time).

But South Korea appears to be lowering the bar over conditions for the resumption of dialogue with North Korea.

Moon said on June 15 that Seoul is open to unconditional talks with the North if Pyongyang does not make additional nuclear and missile provocations.

He proposed a gradual approach of freezing Pyongyang's nuclear weapons program and dismantling it afterwards. 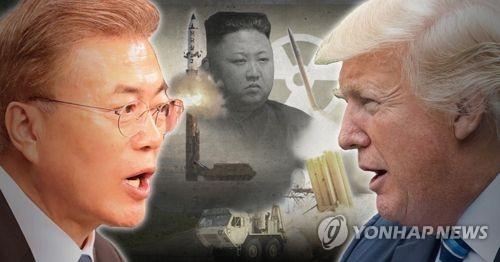 But Washington said that North Korea should denuclearize if it hopes to talk with the U.S.

"Our position has not changed. For the DPRK, for us to engage in talks with the DPRK, they would have to denuclearize. And that is not something we're seeing them take any steps to do," State Department spokeswoman Heather Nauert said at a briefing on June 16.

North Korea is seeking to develop an intercontinental ballistic missile (ICBM) capable of hitting the U.S. mainland. It has conducted five nuclear tests since 2006 and fired numerous ballistic missiles.

Conditions for dialogue have not been created with Seoul and Washington focusing on applying sanctions and pressure against the North.

The latest death of Otto Warmbier, an American college student who was detained in North Korea until recently, lent support to voices in Washington arguing for a tougher stance toward Pyongyang. Warmbier was released in a coma on June 13 after 17 months of captivity.

North Korea's top envoy to India Kye Chun-yong said Wednesday that North Korea can place a moratorium on its nuclear and missile tests if the U.S. suspends its annual joint military drills with South Korea.

It marked the first time that the North raised the possibility of the conditional suspension of its provocations since Moon took office in May.

Moon Chung-in, the president's special security adviser, created a row after he recently told a forum in Washington that the allies may consider scaling back military exercises in exchange for North Korea freezing its nuclear and missile programs.

"North Korea's proposal is an offer that Washington cannot accept," said Cheong Seong-chang, a senior research fellow at the Sejong Institute. "Kye's suggestion means the North has no intention to give up its nuclear weapons."

Both Moon and Trump stressed China's role in reining in North Korea as Beijing has leverage over Pyongyang as the main remaining ally and economic benefactor.

"I believe China is making efforts to stop North Korea from making additional provocations, yet there are no tangible results as of yet," Moon said in an interview with Reuters on Thursday.

Trump recently said on Twitter that he appreciates China's efforts to pressure the North, but it has not worked out.

"At the upcoming summit, Moon and Trump are expected to reaffirm a stern response to North Korea's threats," said Cheong at the Sejong Institute. "South Korea may seek understanding from the U.S. over its strategy in resolving the North's nuke issue." 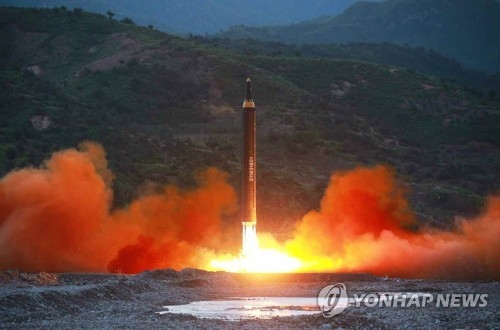