MUJU, South Korea, June 23 (Yonhap) -- The traditional South Korean martial art of taekwondo must keep evolving if it wants to grow into "a well-respected sport" around the world, its global chief said Friday.

South Korean sports administrator Choue Chung-won was elected to his fourth full term as the president of the World Taekwondo Federation (WTF) on Friday. Choue ran unopposed in the election held at Muju National Sports Center in Muju, 240 kilometers south of Seoul, on the eve of the 23rd WTF World Taekwondo Championships.

Choue has been at the WTF's helm since 2004, when he first replaced then-incumbent Kim Un-yong to complete the remainder of Kim's term following his arrest for embezzlement and bribery allegations. Choue was then re-elected in 2005 for a four-year mandate, and won the next two elections in 2009 and 2013.

Choue is credited with turning the fortune around for a sport that was once in danger of getting ousted from the Olympics because of judging controversies. On Choue's watch, the WTF has equipped chest protectors and headgear with electronic sensors for scoring, and its matches take place in an octagon-shaped surface to reduce blind areas for referees. 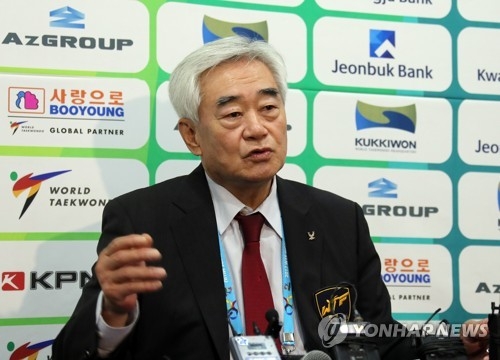 At a press conference after his victory, Choue, 69, said he will not cease to make changes to taekwondo as long as they can make the sport better.

"All Olympic sports must never stop evolving," Choue said. "Sports can't survive if the public doesn't want to see them and isn't entertained by them."

For the upcoming world championships, the WTF made another scoring change. Kicks to the body will now be worth two points, up from one point. Choue said test events under the new scoring scale went well and he's looking forward to an "exciting" competition.

"I believe taekwondo has taken firm roots as an Olympic sport," Choue said. "Of all combat sports in the Olympics, I think taekwondo is the most transparent and fairly contested."

Choue insisted that taekwondo now has to take the next step and become a widely respected sport. To that end, the WTF signed a cooperative agreement with the Taekwondo Humanitarian Foundation in May last year to promote taekwondo and encourage personal growth among refugees and displaced youths.

And for the first time at a WTF world championships, a refugee athlete, Dina Pouryounes Langerroudi of the Netherlands, will compete in Muju.

Para-taekwondo has been included in the 2020 Tokyo Paralympics program, and Choue said he hoped the competition will inspire many others and help develop the WTF into a respected organization.

"If we can become a sport that can make contributions to mankind, then we'll further strengthen our status as an Olympic sport," Choue said. "Many different sports are being enjoyed by people, but not a lot of them are respected at the same time. We'll do our best to earn people's respect."