SEOUL, June 23 (Yonhap) -- South Korea's top engineering and technology university, the Korea Advanced Institute of Science and Technology (KAIST), held an event in Seoul Friday to court talented international students and faculty as it strives to further expand its achievements.

In the first-ever meeting with foreign diplomats here, the school showcased the advances it has made and the top-notch education it offers to students. The "KAIST Embassy Day" event brought together about 90 diplomats from 65 nations in South Korea, including 31 ambassadors, organizers said.

"KAIST is the first and top science and technology university in South Korea. Today, it is being truly recognized as a world-class university. The presence of this leading group of diplomats reflects how KAIST's reputation has blossomed," Shin Sung-chul, the president of KAIST, said.

The school said the aim of the event is to eventually bring in more "qualified" and "diversified" students to further boost global competitiveness.

"A total of 710 foreign students from 86 countries, representing about 8 percent of the total student body, are currently studying at KAIST. We will actively recruit more foreign professors and students to KAIST in the coming years to achieve a truly global campus," Shin said.

KAIST said its goal is to expand the ratio of foreign students from the current eight percent to 15 percent by 2021 and raise the number of international faculty to 12 percent by the target year. 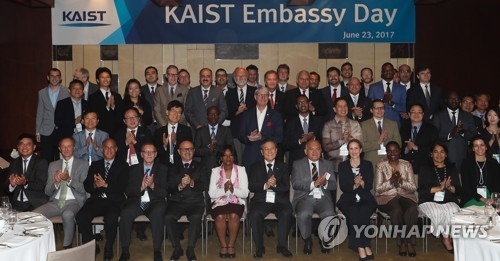 During the event, KAIST officials introduced the university's education system, academic achievements and scholarship programs for foreign students and efforts to step up cooperation with universities around the world.

In addition to accepting more foreign students, KAIST said it hopes to add greater diversity among international students in terms of nationalities and regions as it aims to create a truly bilingual English-Korean campus.

Among foreign students, Kazakhstan topped the list with 12, followed by Vietnam with eight, KAIST said, adding that it aims to target more students from developing countries.

"KAIST wants to partner with global talent all around the world. That is one way of giving back to the world what we have received from the global community," the president said.

Specifically, KAIST said it plans to pick a select number of students annually through the recommendations of each ambassador and the chosen students will receive favorable admissions.

"Each ambassador may recommend up to two students per year, and the number of recommendations could be increased down the line," said Shin Ha-young, dean of KAIST's admission office, adding that such students will start studies at KAIST as early as the fall semester of 2018.

KAIST said it provides a special benefits package for its students including a full scholarship, free room and board, an allowance, and, for Korean men, waiving of their military obligations. 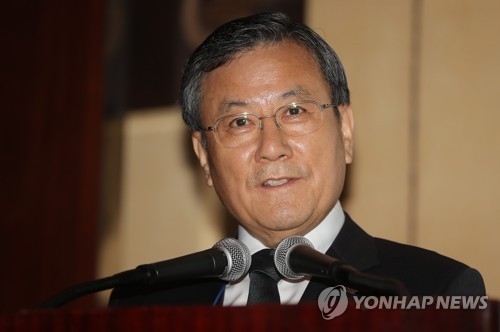 "A stipend worth US$300 and national health insurance are provided to each foreign student every month and, unlike other top tech universities, the undergraduate research program is highly active, with undergraduates having many opportunities to serve as lab interns," the dean said.

KAIST said the recommendation by an envoy will be accepted for graduate students but it will not guarantee admission because each department has greater say in picking people it needs.

Toma Husak, ambassador of the Czech Republic to the Republic of Korea, said the event would open an opportunity for more qualified students to come to KAIST for quality education.

"Each year, 250-300 students from the Czech (Republic) come to (South) Korea and our government looks forward to expanding cooperation with KAIST," the ambassador told Yonhap News Agency.

Jean-Charles Bazin, who spent a year at KAIST 13 years ago as an exchange student, returned to the school as an assistant professor in May.

"As an international exchange student, I was pleased by how KAIST makes a great effort to welcome international students," the French professor in the fields of artificial intelligence and virtual reality said. "In my opinion, if you want to initiate or strengthen collaborations with Asia, KAIST is definitely one of the very best choices you can make."