BUSAN, April 23 (Yonhap) -- A new ordinance bill to entrust municipalities with the protection and care of statues symbolizing Korean women forced to work in Japanese wartime military brothels was passed through the Busan metropolitan assembly's welfare and environment committee on Friday.

The ordinance, if enacted at a plenary session of the assembly in the city of Busan on South Korea's southeastern coast, will clear the controversy over whether the city's Dong Ward is able to give support to the management of a comfort women statue in front of the Japanese Consulate General that a civic group installed last December without getting permission to use a public road.

Under the ordinance, the municipality is empowered to crack down on acts of throwing garbage and writing graffiti messages near the statue.

If the ordinance is enacted, two other similar statues in the Busan region will be taken care of by the respective municipality.

It also calls for increasing a maintenance allowance given to a victim of Japan's sexual slavery during World War II, a resident of Busan. 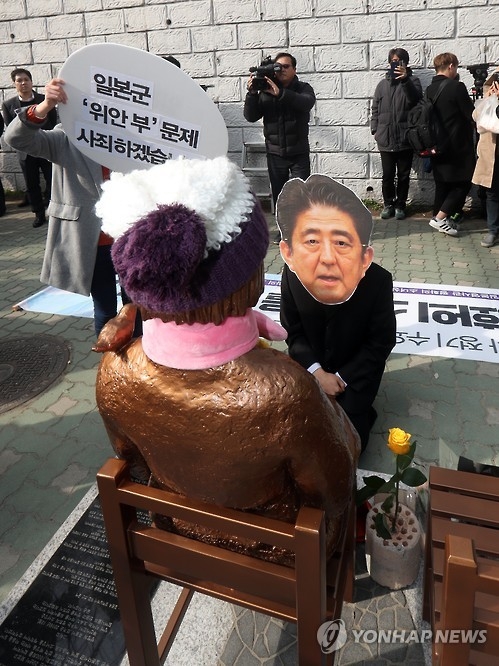 In December, the Dong Ward office rejected the civic group's request to place the statue in front of the consulate but later allowed its installation in the face of strong public outcry.

Tokyo has claimed that a statue commemorating the victims before its consulate in Busan, along with another standing in front of its embassy in Seoul, runs counter to a Seoul-Tokyo deal in 2015 to resolve the long-running rift over Japan's wartime sexual enslavement of Korean women.

Critics in Seoul demand the cancellation of the accord, saying that the Japanese government still refuses to recognize its legal responsibility and denies the women were forcefully recruited to front-line military brothels. The deal was also reached without consultation with the victims, they said.

Historians estimate that up to 200,000 women, mostly from Korea, were forced to work in front-line brothels for Japanese troops during World War II. Around 40 South Korean victims are still alive and mostly in their late 80s.