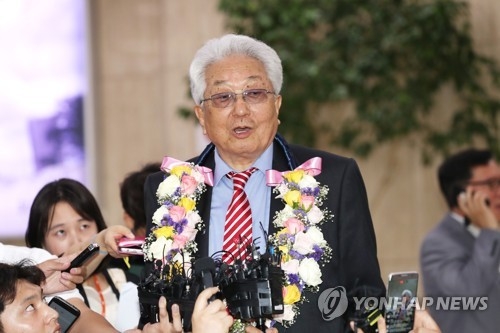 Pressed about those suggestions, Chang said he was not in a position to discuss them.

"I understand that these topics have been covered in the media," Chang told reporters at Gimpo International Airport. "But I am here as an IOC member of North Korea, and representing the IOC. It's not my place to commend on things related to the PyeongChang Olympics."

Chang did say he may be able to pass that along to the North Korean Olympic committee.

IOC President Thomas Bach will arrive in South Korea next Thursday, and will attend the WTF championships' closing ceremony the following day.

"I just spoke to Mr. President (Bach) on the phone, and once he gets here, we'll have discussions," Chang said. "And it's not something that national Olympic committees can decide alone. The IOC has to be involved. And I will participate in the discussions from the IOC's perspective."

When asked if he agreed with co-hosting in general, Chang simply said, "I only abide by the Olympic Charter."

PyeongChang flatly rejected the possibility of sharing events with North Korea in December 2014. Yet with liberal-minded President Moon Jae-in in office, the first Winter Olympics to be held in South Korea has emerged as a possible platform on which to engage North Korea in sports exchanges.

Sports Minister Do said earlier this week that North Korea's presence in PyeongChang should help make the competition a "Peace Olympics."