WASHINGTON, June 23 (Yonhap) -- U.S. Vice President Mike Pence has vowed to put unrelenting pressure on North Korea until the communist regime gives up its nuclear and missile programs "once and for all."

Pence made the remark during a Wilson Center speech Thursday as calls have been mounting for tougher sanctions on the North in the wake of the death of American college student Otto Warmbier just days after he was released from the North in a coma following 17 months of detention.

"As the president said just a few days ago, North Korea's treatment of Otto Warmbier was a disgrace. And I can assure you it only deepens our determination to prevent such tragedies from befalling innocent people in the days ahead," Pence said.

"Under this administration, the United States will continue to work diligently with our allies across the region and China and the wider world to bring increased economic and diplomatic pressure to bear on North Korea. And we will do so until North Korea abandons its nuclear and ballistic missile programs once and for all," he said. 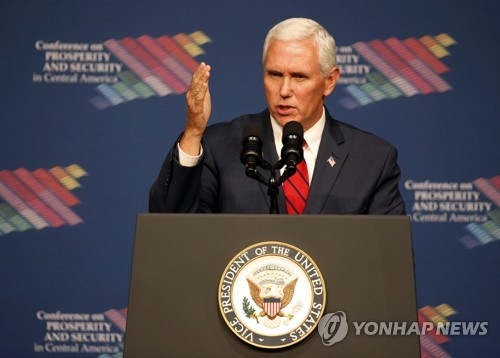