According to the country's main bourse operator Korea Exchange, shares of SK hynix soared 7.44 percent on-week to close at 65,000 won (US$57) on Friday. The price reached 65,500 won at one point on Thursday, a significant increase from the 135 won it posted in March 2003.

Following the latest gains of its memory arm, SK Group became the No. 2 player on the main bourse in terms of market capitalization at 113 trillion won as of Friday, beating Hyundai Motor Group with 108 trillion won.

Market watchers said SK hynix is expected to continue posting rosy performances throughout next year backed by the industrywide boom.

"Despite the slowing demand for smartphones in China, the market condition is expected to remain sound backed by server DRAM products," said Lee Se-cheol, an analyst at NH Investment & Securities.

Others said investors were also boosted by the report that a global consortium including SK hyinx was tapped as the preferred bidder for the sale of the memory arm of Japanese tech giant Toshiba. The consortium includes Japanese players and U.S. Bain Capital.

"Toshiba's memory business boasts a sound portfolio, with its NAND production capability standing as No. 2 in the world," said Do Hyun-woo, an analyst at Mirae Asset Daewoo, claiming the potential deal will benefit SK hynix if successful. 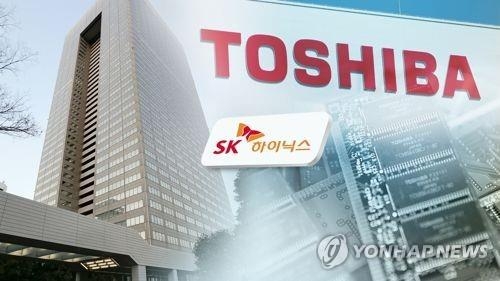