SEOUL, June 24 (Yonhap) -- The founder of South Korea's retail giant Lotte Group has lost his seat on the board of the conglomerate's holding firm, industry sources said Saturday.

Japan-based Lotte Holdings Co., the holding firm of the group's Japanese affiliates, decided not to extend the term of Shin Kyuk-ho as a board member during its shareholders meeting.

Lotte Holdings is at the top of Lotte's Japanese affiliates via a cobweb-like ownership structure and holds a 19 percent stake in Hotel Lotte Co., a de facto holding firm of the group's Korean units.

It will mark the first time since 1948 for Shin to completely depart from the group's management.

During the meeting, shareholders also dismissed the proposal made by Shin Dong-joo, the eldest son of the founder, to designate himself as a board member and dismiss his younger brother Dong-bin.

The two have been in conflict as the elder son claims that the founder handpicked him as the successor for the retail group, while Dong-bin insists that his father was unable to make reasonable judgments due to mental health problems. 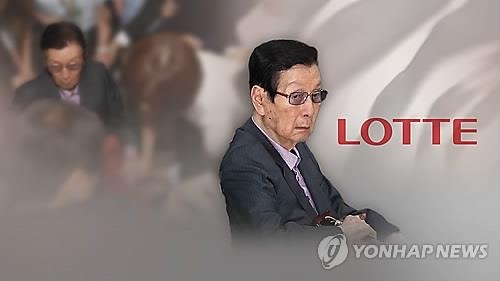